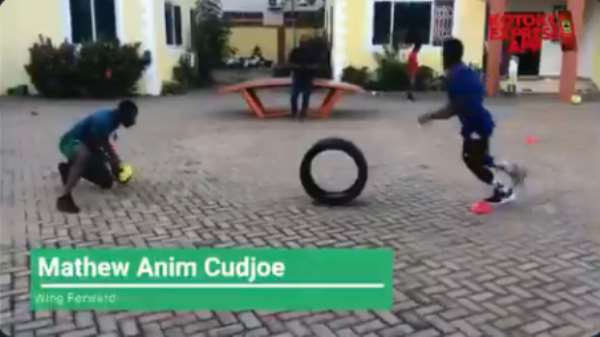 Asante Kotoko's teenage sensation, Mathew Anim Cudjoe has intensified his training sessions at home despite the uncertainty surrounding the resumption of the football season.

The 2019/2020 season remains suspended as a precautionary measure against the spread of the Coronavirus which has so far seen as many as 408 people test positive in Ghana.

While players stay at home, the highly-rated teenager is not staying idle but continues to train hard to keep himself fit and in good shape.

In a video uploaded by Asante Kotoko on YouTube, Mathew Anim Cudjoe who is managed by Sammy Anim Addo is seen training intensively with who appears to be his personal trainer at home.

Prior to the suspension of the Ghana Premier League season, he had made a total of 6 appearances [all as a second-half substitute] and had scored one goal in the process.

Mathew Cudjoe continues to be monitored by FC Barcelona, FC Bayern Munich, as well as PSG. He already had a successful trial session with Bayern earlier this year and could earn a move to Europe in the summer transfer window.

Checkout a short video of the attacker’s training at home in the video below.