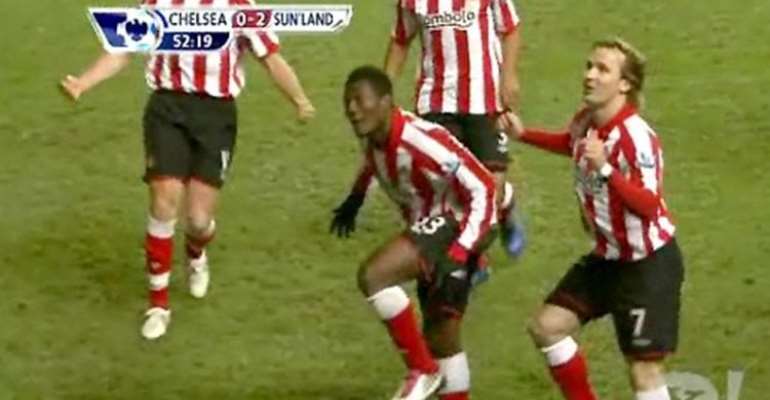 Former Netherlands international Boudewijn Zenden has asserted Asamoah Gyan's celebration for Sunderland in a 3-0 victory at Chelsea on November 2010, was "meant to be funny".

The Ghana all-time top scorer was on loan at the Stadium of Light from French Ligue 1 club Rennes during the 2010-2011 season and one of his most memorable goals came at Stamford Bridge.

He scored the second goal of the day with a clinical effort that left goalkeeper Petr Cech for dead, the other two goals coming from Nedum Onuha and Danny Welbeck.

What stood out was Gyan's celebration in which he danced in front of the small travelling Black Cat supporters, with Zenden - who started the move for his goal, having joined the dance.

"We won 3-0 away at Chelsea, and when he [Gyan] went to the corner to do his quirky dance, I joined in with him," Zenden told FourFourTwo as reported by the Chronicle Live.

"It was always meant to be funny. I saw plenty of comical parodies afterwards; Strictly Come Dancing footage with our heads attached to the dancers.

"After that game, the Sunderland fans would sing: 'Zenden give us a dance...'

"I can appreciate that kind of banter."
Gyan scored 10 Premier League goals that season before his move was made permanent for the 2011-12 season.

His time was short-lived however as he made only four appearances during the first half of the campaign before moving to Al Ain in the United Arab Emirates, first on loan and then on a permanent transfer.