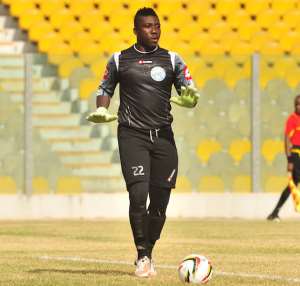 Ghana Premier League club Great Olympics is said to be in talks with former Aduana Stars goalkeeper Stephen Adama to secure his services.

The club got reinstated into the Ghanaian top-flight prior to the start of the 2019/2020 season and has been fairly good.

Before the season was suspended due to the Coronavirus (Covid-19) pandemic, the Dade Boys had managed to win 6 matches, drawn 2 games, and had lost 7 matches which left them sitting 10th on the standings of the division.

Looking to better that position on the log, Great Olympics has decided to reinforce its squad with some top players in the currently opened second transfer window of the season.

According to reports reaching Modernghana Sports, the Accra-based club is in advanced talks with goalkeeper Stephen Adams and could wrap up his signing in the next couple of days.

Adams, a formal Black Stars goalkeeper is seen as a man with a lot of experience that will add quality to that department of the team before the Ghana Premier League resumes.

Meanwhile, Great Olympics is understood to have released 8 players including goalkeeper Ernest Sowah, and outfield players such as Emmanuel Clottey, Godfred Saka, and Ollenu Ashitey.

The move is to make room for incoming recruitments.