Muntari & Internazionale's Treble: Credit Where Credit Is Due 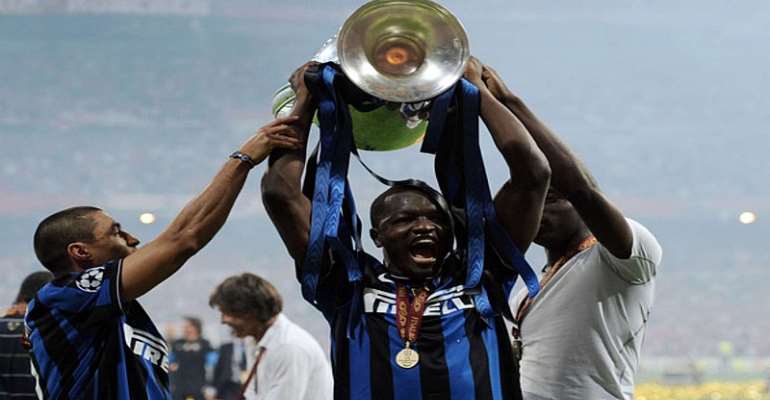 Whenever critics wax lyrical about Jose Mourinho’s Internazionale side that claimed a historic Serie A, Coppa Italia and Champions League in 2009/10, the first names that immediately pop up are Diego Milito, Wesley Sneijder and Samuel Eto’o, three arrivals to the club at the start of that campaign.

Maicon and club captain Javier Zanetti aren’t left out either when observers reminisce over the only Italian side to ever achieve the feat, and the third club to do so in the Champions League era.

When those plaudits are being handed out, Sulley Muntari’s name tends to be left out, owing to his reduced involvement in that season’s European run. Even though the Ghanaian featured in nine games in their Champions League success, he only started two of those matches, so maybe he’s understandably left out of the discussion.

Another school of thought argues that his style and profile probably didn’t endear him to observers throughout Inter’s campaign. His henchman status and blue-collar nature wouldn’t make highlight reels or be accepted by many who perceived Mourinho’s team to be dirty and masters of the dark arts.

Indeed, Muntari was one of the team’s worst disciplined players, receiving 10 yellows and one sending off throughout the campaign. Surprisingly, he didn’t have the worst rap sheet in that Nerazzurri outfit with Dejan Stankovic and Christian Chivu receiving 14 bookings over the course of the season.

While the West African only played a bit-part role on the continent, with Mourinho favouring Esteban Cambiasso and Thiago Motta in central midfield (with Zanetti sometimes slotting in in the middle), he featured 27 times in the league and five times in the domestic cup.

16 of the aforementioned Serie A games were starts, while he featured in three games from the off in the Coppa Italia. Given his role in the side wasn’t to score or create tonnes of opportunities, his numbers weren’t that great compared to his first campaign under Mourinho.

Muntari netted two and registered as many assists in 42 appearances, a little reduction from 2008/09 where he scored five times and set up six in 38 appearances.

That previous year laid the foundation for the following year’s success and the ex-Ghana man’s contribution played a significant role in securing the treble.

Many will remember how Mourinho, upon joining Inter in 2008 wanted a reunion with trusted lieutenant at Chelsea Frank Lampard to reprise his box-to-box goalscoring exploits in the Italian top flight.

Prior to the ex-Porto coach’s arrival, Lampard had netted five and six goals in his first two campaigns in West London, but hit the back of the net 13 times in the Premier League in 04/05 and 16 times the following season. The reward was finishing second to Brazilian maestro Ronaldinho in the Ballon d’Or voting in 2005.

Indeed, it was unsurprising that Mourinho wanted the Englishman to join him at San Siro, but had to turn to Muntari, then at Portsmouth when a move for his top target failed to materialise.

It was a huge show of faith in the 23-year-old who shone in his only campaign at Fratton Park to carry Pompey to their best-ever campaign in the top flight, ending in eighth-place and winning the FA Cup.

Muntari famously netted a penalty past emergency goalkeeper Rio Ferdinand at Old Trafford in a 1-0 quarter-final win. Led by Harry Redknapp, the club secured their first major title since 1950 and success in the sport’s oldest cup competition since 1939.

The lure of featuring under Mourinho, though, was too hard to refuse and Muntari, who claimed to be a Portsmouth supporter when he signed, departed a year later for a slight profit.

Having never won the Serie A, the Ghanaian was instrumental in securing a fourth successive league crown in 07/08 scoring four times and assisting six in 27 appearances.

Three games particularly stood out: goal and assist in a 2-1 win over Napoli in November, assist for Mario Balotelli against league challengers Juventus (game ended 1-1) and scoring and setting up another against Lazio in May in the title run-in.

Muntari, a product of Gino Pozzo’s recruitment network at Udinese, was finally a league champion and he’d played a large part in his side’s success.

The ex-Portsmouth man may not have been as influential in Inter’s European run in 09/10; still performances in the previous year foreshadowed their history-making success that will be remembered for years to come.