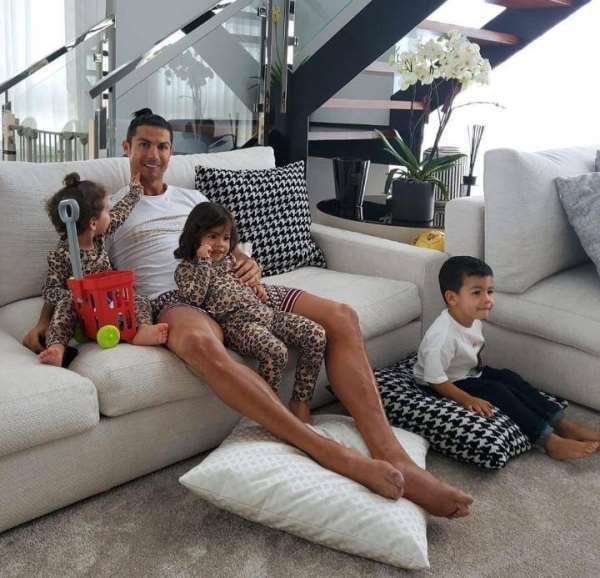 The seven-storey mansion in Funchal, where Ronaldo is originally from, was finally finished last summer - four years after the former Manchester United No7 bought a warehouse and converted it into this luxury abode.

It is believed Ronaldo splashed around £7million to recover the dream home, with Georgina smitten by its incredible sea view, as well as its amenities including TWO Olympic-sized swimming pools, jacuzzi and a football pitch.

In 2015, Ronaldo bought the building, near the luxury Savoy Hotel and located at the entrance of the port of Funchal, from local designer Nini Andrade Silva for an undisclosed sum.

Before that, it was the warehouse where Diário de Notícias da Madeira, the local Madeira newspaper, was based.

The building also housed a famous nightclub called Bar/Club Noir over the years.

But Ronaldo was adamant that he would turn it into a dream property.

In 2019, when work was finally completed and the building was restored, he moved in with his mum and brother Hugo, who also manages his nearby CR7 Museum.

It's not known how many bedrooms and bathrooms the property boasts, however, there are four floors above ground - with the top two taken by Ronaldo, Georgina and their brood.

On the roof you will find one of the swimming pools, which Ronaldo was snapped enjoying during quarantine by one of its several terraces.

The rooftop boasts a stunning pool

There are two gyms, which Ronaldo has been using extensively to sculpt his chiselled abs, and even a small football pitch, should he want a kickabout with Cristiano Jr.

Underground, there's a large garage that can accommodate five cars.

When Ronaldo's partner Georgina Rodriguez saw the sea view the property offered, she reportedly fell in love with the romantic getaway.

Although it doesn't appear to be very private, the view of the Atlantic Ocean from the rooftop pool is stunning.

Overlooking the cruise port of Funchal, the scenic landscape and sea air certainly beats where the Ronaldo family reside in Turin for peace and comfort.

While in quarantine during the coronavirus crisis, Georgina has taken to Instagram to show the view off too - and who can blame her.

The view property boasts is out of this world

Ronaldo's mum Dolores is believed to live there

The Ronaldo family take advantage of the jacuzzi

With Serie A suspended because of Covid-19, Ronaldo was given permission by Juventus to go to Madeira to help mum Dolores.

In the beginning of March she suffered a stroke and the five-time Ballon d'Or-winner flew to her bedside to be with her.

When he visited her at the Dr Nelio Mendonca Hospital, before she was transferred to a private hospital, he was said to have worn a protective mask, clothing and gloves after it was revealed one of his team-mates tested positive for coronavirus.

Although Ronaldo is based in Italy for now, his Madeira mansion will surely be his holiday home.

Last summer, shortly before preseason kicked off, he was spied on one of the terraces enjoying a romantic trip with Georgina without their children.

Ronaldo entertains his family in the Madeira abode

Ronaldo showed off his home gym, which he has two in the Madeira property

Ronaldo's brother Hugo is also said to live in the property

And with close proximity to his 48-room luxury hotel, the Pestana CR7, it'll also be a good spot to keep on top of his business interests.

Ronaldo has never forgotten his roots, recently supplying Madeira hospitals with ventilators and equipment during the coronavirus crisis.

We will not hesitate to proceed on strike on Monday if deman...
28 minutes ago

Treason trial: Bomb the ministry for transmission to go off ...
44 minutes ago