Balotelli's Most Shocking Confessions: Guns, Racism And A House On Fire 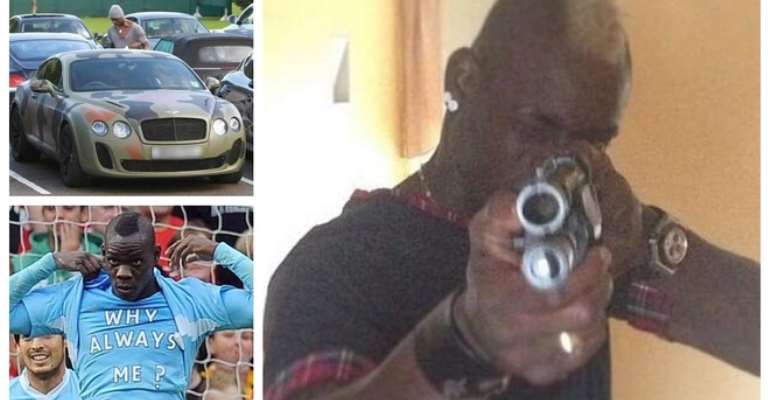 Mario Balotelli has never been far from the headlines throughout his career.

The Italian's on-field talent is matched by the funny, often innocent and usually ridiculous stories that surround him.

On the pitch Balotelli will be remembered for his goals, but what he's gotten up to away from football will probably be remembered just as much.

Balotelli has never hidden his love for Milan, even despite coming through at Inter.

On another occasion he even put on the Milan shirt at home on Italian program 'Striscia la Notizia', which prompted Mourinho to leave him out of the squad for the next game.

"I could write a 200-page book on my two years with him," Mourinho said.

"It wouldn't be a drama, but a comedy."
Mario was never shy of hiding his love for the other half of Milan though, even saying "one day I'll fulfil my dream of playing in that shirt" in 2010.

Another of his highlights came in Manchester when he opted to entertain himself by throwing darts at one of the club's youth players.

Naturally, the club weren't best pleased and fined him over 110,000 euros.

It's said that he had his car taken about 30 times for disobeying parking laws in Manchester, he was involved in an accident and received countless fines.

Balotelli loves cars, and even showed up to training in a camouflage Bentley valued at over 200,000 euros.

Once stopped by a policeman and asked why he was carrying more than 25,000 pounds on the passenger seat, Balotelli simply responded: "because I'm rich".

"There's only one player who is a little better than me - [Lionel] Messi," said Mario in 2010 when named the Golden Boy.

In 2016 he predicted that he'd go on to win the Ballon d'Or, showing he's always backed himself.

In October 2011 Balotelli had a domestic problem when he started a fire at home after using fireworks.

Never shy of expressing himself, Balotelli caused a stir in a dispute with an ex on social media.

Not even the Queen of England escapes Balotelli's anecdotes, dating back to the 2014 World Cup in Brazil when Italy and England were in the same group.

"If we beat Costa Rica I want a kiss, obviously on the cheek, from the UK Queen," he tweeted.

In June 2011, Mario visited the Scampia neighbourhood in Naples' outskirts, known for its mob ties.

"I realised quickly that it could be dangerous so I left," he later said.

At Inter, Balotelli was driving an Audi around Milan when he and his friends pretended to shoot a toy gun into the air, prompting the police to stop him.

"I haven't done anything," he told La Gazzetta dello Sport.

"I was just playing with my friends."

To his credit, Mario has never bitten his tongue when faced with racism and has regularly spoken out against the problem.

"If someone throws a banana at me in the street or on a pitch then I'll go to jail," he said to the Guardian ahead of the 2012 European Championship.

"Like all young people, sometimes he does stupid things," said Roberto Mancini of his former player in 2013.