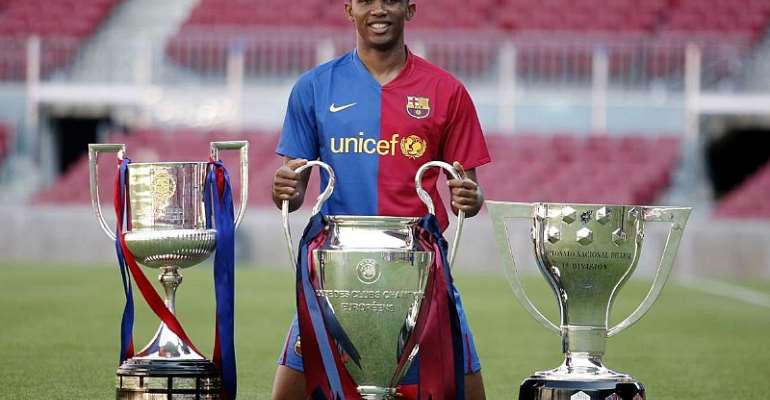 With his time with both Barcelona and Inter etched into the history books, Samuel Eto'o remains one of the most influential footballers of the current century, and now the former Cameroon forward has made several confessions about events in his career.

In the 2000/01 season, a 19-year-old Eto'o would receive one of his most important football lessons from Luis Aragones. During a match between Real Mallorca and Real Zaragoza, the Cameroonian forward was substituted a few minutes into the second half, and he was livid. The goalscorer kicked a bottle and launched a verbal tirade towards Aragones.

Aragones responded in an equally emotive fashion, grabbing Eto'o by his shirt and telling him: "Not with me, do you understand?"

It was a confrontation that Eto'o would later count as a life lesson and he would go on to describe their relationship as that of a father and son.

On August 12, 2004, Eto'o posed smiling with Joan Laporta as he was presented as a new Barcelona player. The soap opera of that summer had drawn to a close, and the forward had made headlines with his words on a possible link to Real Madrid.

"Not even if they paid me a billion euros was I going to Real Madrid, because I wouldn't have been happy. I'm not a boy who can promise 50 goals, but what I can promise is that I will run."

In his first season as a Barcelona player, Eto'o celebrated winning the LaLiga title in style, and in that moment of euphoria, remembered to make a verbal jab at Los Blancos.

In a clash between the Blaugrana and Racing Santander in 2007, it was rumoured that Eto'o refused to come off the bench in the closing minutes. Once again, Eto'o made clear that he had no time for people doubting his professionalism.

"If someone has the balls to tell me to my face, let me know. Rijkaard is a bad person, he's putting the press in the dressing room. Anyone who goes to a press conference to say Samuel Eto'o didn't want to play is a bad person."

When Guardiola arrived at Barcelona he intended to oversee a complete overhaul of the dressing room. Eto'o was seen as a player who needed to leave, but he desperately didn't want to. The forward ended up convincing Guardiola and he was part of a historic team.

"I said to Guardiola, you will apologise to me because it is I who will make Barcelona win, not Messi. I was the one who made us win and Pep should ask me for forgiveness."

"I'm not going to play anymore." These were his words when he was the victim of racial abuse in Spain, more specifically, Zaragoza.

He grew tired of listening to such abuse, and a year earlier had celebrated a goal in that stadium by doing a gorilla impression. He was one of the first to stand up to racism whilst on the pitch.

In what was a different development, Eto'o would pose topless for the cover of Rolling Stone magazine, to accompany an interview he gave them.

Anti-gay bill : Tell foreign missions if they provoke us we'...
21 minutes ago