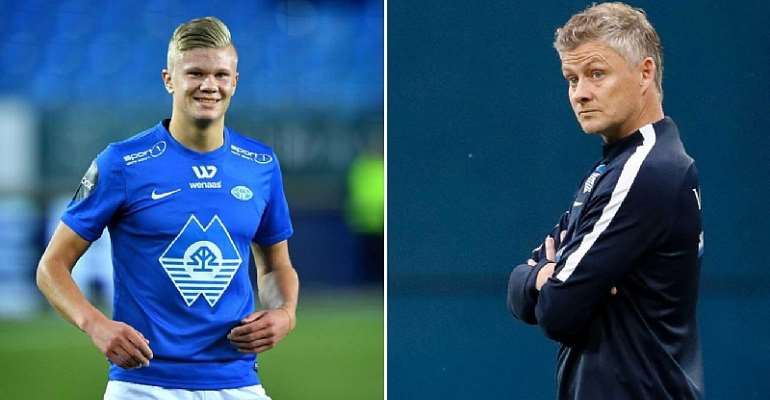 In the first of a three-part exclusive interview series with our Eurosport colleagues in Norway, Erling Haaland talks about the game that changed his career and how Ole Gunnar Solskjaer helped him.

Bergen, July 2018. Ole Gunnar Solskjaer’s Molde team are the visitors to face SK Brann and in the line-up is a certain Erling Braut Haaland.

The teenager is under pressure after missing chances the week before but what followed was nothing short of remarkable as Haaland exploded with four goals in the opening 20 minutes.

The birth of a superstar: When Haaland scored 4 goals in 21 minutes for Molde

“When I look back, it was really a pretty strange time, the start of 2018. That match somehow became a kind of turning point for my career, if you can say it that way.” Haaland told our colleagues in Norway.

“Now I can tell you what it was like for me. I'll try to remember, we played away against Kristiansund and lost 1-0. I missed against the keeper before the end.” Haaland continued.

“Then we had a little holiday week, I trained with (Fredrik) Aursnes, and my brother and Eirik Hestad and a friend, Alexander. We were at Marbella training hard together, refining the combinations and relationships and getting sun.

“The game afterwards was Stabaek at home, if I remember correct. I remember I had a chance and hit really well, but shot in the middle of the target. I felt something stuck in me.

Haaland on the shooting advice he got from Solskjaer

“But then something happened when the team trained at Lubbenes the week after, Molde's training ground with grass, since we were going to meet Brann, the top team at the table and that played on grass, and they had hardly let in any goals that season.

“I remember it was frustrating as a young striker, everything goes against you on training. I was alone with the keeper and the bar, got crosses from Ole Gunnar [Solskjaer], but I missed on every opportunity. I remember Ole then said ‘I think you start this game, so just be ready’,

“I had not had the best training week, but then it was good atmosphere in the room that I shared with Hestad. And I remember from the warm-up that I felt pretty light,

“I remember me and Kristoffer Haugen, the newcomer from Viking, playing a little, and Grandma and Grandpa were in the stands. They stood with the Molde fans, I had fixed tickets there and it was sunny outside and then the match started then, and it went as it went,” Haaland concludes with a massive smile on his face.

Much has been made about the formative effects that Solskjaer, a legendary Norwegian striker in his own right, has had on the young Haaland, who has already taken the footballing world by storm.

Ole Gunnar Solskjaer, manager of Molde looks on during the UEFA Europa League match between Celtic FC and Molde FK at Celtic Park on November 5, 2015 in Glasgow, Scotland.Getty Images

Eurosport Norway commentator Kenneth Fredheim touched on this during the interview saying to Haaland “One thing I want to ask Erling about. I have been a commentator at many Premier League games when your father, Alfie, played and also Solskjaer, and the thing with Ole was that he was a good goalscorer and an ice cold finisher.

“He did not use power but was calm and placed the ball where he wanted it. If you look at your goals now in the Brann - Molde game. You are so calm when you strike the ball, I mean, you was just 17 years old at that time. Where do you have that skill from? Have you learned a lot from Ole Gunnar?”

Haaland replied “I forgot to tell you this, but before that game, Solskjaer and I did some practice on finishing. Not just crosses. I remember he taught me some easy rules.

" The first one, was on touch. That I don’t use too much power and trying to destroy the goal or the goalie with ball. I think that I was thinking about doing that and it was something new that he told me. I trained a bit on that, but without scoring. But at least I had it in my head after that training session. "

“That was something he taught me in the days before that game and he has taught me a lot to be calm, and also be on your toes and come to those situation where the ball is coming. It is then you have the chance to score. He deserves a lot of credit for teaching me that.”

Former Norway U21, Molde and Stromsgodset manager Tor Ole Skullerud added when asked about Haaland’s credit “I think he has to get the credit himself. I think this is something that he just has, an instinct, that you have or don’t have as a footballer.

“And the best strikers in the world have a combination of what we are talking about now. To be calm and put the ball in the net with the inside of your foot and mix it up with power.

“You can see Erling is scoring goals in many ways. It is fantastic to see him when he strikes the ball from distance also, for example. He has all these attributes. He has learned after many years at home, at Jaeren, Bryne and from his father, and that has put him where he is today. A good combination on everything.”

US revokes licence of top Chinese telecoms company
29 minutes ago