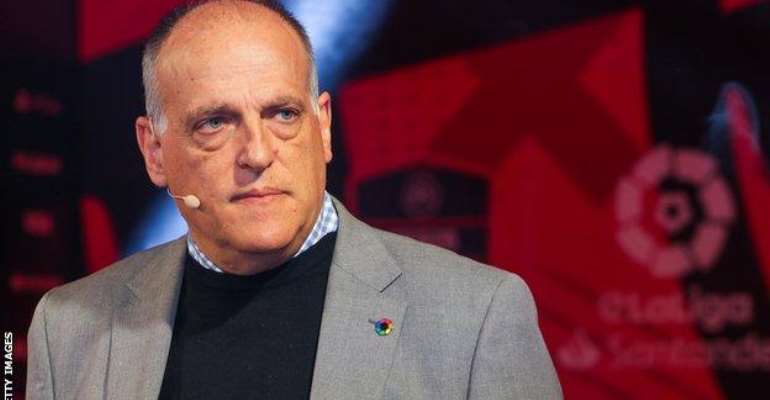 Javier Tebas has been La Liga's president since 2013

La Liga could resume as early as 28 May in the best-case scenario as the league discusses its options, says its president Javier Tebas.

No Spanish side has played a competitive game since 11 March, when Atletico Madrid knocked holders Liverpool out of the Champions League.

Tebas says training will not return until emergency measures - in place until 26 April - are lifted in Spain.

He estimates clubs could lose 1bn euros if the current campaign is cancelled.

Tebas revealed three start dates are currently being discussed with Uefa, saying: "Of all the different scenarios we have been looking at with Uefa to go back to competing, the most probable ones are 28 May, 6 June or 28 June," he said.

"We can't say an exact date. This will be given to us by the authorities in Spain. But we still have time to get back to training before that."

Tebas says La Liga is not contemplating a failure to complete the domestic campaign, which still has 11 rounds of matches to play.

However, having done the maths, Tebas is conscious that even if games are played with supporters in stadiums, a scenario he does not feel is likely in the short term, the losses will be extreme.

He said: "If we are looking at the economic impact, including the money we would get from European competitions, the revenue Spanish clubs would miss out on if we don't get back playing again is 1bn euros. If we do get playing but without spectators, it would be 300m.

"Even if we get back to playing with spectators, the damage this situation has already caused would be 150m euros."

Uefa has urged individual leagues not to follow Belgium's example by scrapping competitions - and warned they risk not being allowed into next season's European competition if they do.

A working group - which also includes representatives from the European Clubs' Association and the European Leagues - expects to have a proposal to put forward by the middle of May.

Tebas says two strategies are being worked on.
One involves domestic league matches being played at weekends and European and general cup competitions in midweek. The second is to play blocks of fixtures, with domestic competitions being finished in June and July, before European games are played in July and August.

With uncertainty over when the current restrictions across Europe will be lifted, Tebas said it was "logical" some leagues may start before others.

"If they can start, they should," he said, while stating some clubs may not be able to play games at their own stadiums due to planned construction work.

Tebas was careful not to state any date by which the 2019-20 season must be finished.

However, he spoke regularly about August being a finishing point and underlined why, no matter when the campaign eventually ends, scrapping and altering tournaments next season to create space for a full league programme is fraught with difficulty.

"It is much more complicated than just making a decision," he said.

"Each country is different. In England, you have three competitions. In Spain and Italy it is two. There are 18 teams in the German league but all the others have 20.

"The leagues who have problems in their calendar should look for internal solutions. If that is impossible, we might need some kind of co-ordination with Uefa but at the moment, we are not considering changing formats.

"Think about the top leagues. We have sold our broadcasting rights based on certain formats. We have 20 clubs and 380 matches played during a specific period of time.

"Uefa has also sold its rights based on a format, including the qualifiers and the group phase. This applies to everyone."

Tebas revealed La Liga has received 90% of its broadcasting right payments. However, with 28% of the season remaining, a hefty repayment will be due if no games are played.

As with England, the Spanish league has been looking for assistance from the players. As with England, so far, there has been no agreement, although Barcelona and Atletico Madrid have reached individual deals with their clubs.

"It is quite complicated to get players to accept less money," he said.

"They can't do activities in a normal manner, so there should be a reduction- but we have not managed to reach global agreement with the union.

"It means the clubs have two options: a legal one in the form of a temporary lay-off - eight clubs in the top two leagues have registered to be part of this agreement - and reduced salaries by 70% a day.

"Other clubs have to reach individual agreements with players."

A vocal critic of Manchester City and Paris St-Germain, who he argues are funded by states, Tebas reiterated his belief that financial fair play (FFP) regulations should, with slight alterations, continue to be implemented.

"This is something that has been talked about in European Leagues board meetings and in the Uefa working group," he said. "FFP has to continue.

"Certain dates will be delayed for presentation of the documents and we are changing the dates for certain payments but nothing more.

"If people want to invest a lot of money to help, we have to look at it. But just because you have a crisis, I don't think you should accept money from anyone.

"If we cannot control the clubs' wealth, European football will end up in the hands of states. When the crisis comes to an end, they might not be affected. A club shouldn't be allowed to get a competitive advantage because someone wants to put in some money."