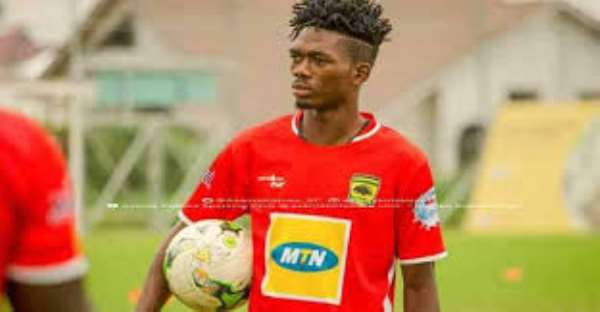 Asante Kotoko defender, Empem Dacosta has revealed that prior to his transfer to the club he had to swerve Medeama Sporting Club (SC) who almost captured his signature.

The central defender who also excels as a right-back joined the Porcupine Warriors in July 2019 after impressing for Karela United in the previous seasons even though there was not a stable football league in the country.

Recounting the days leading to his transfer to Kotoko in an interview with Kumasi FM, Empem Dacosta has shared that he almost signed for Tarkwa-based Medeama SC.

“I had to swerve Medeama for Kotoko. I was in the office of Mr. Moses Parker when Mr. Edmund Ackah of Kotoko called me. I quickly left for Kumasi for my medicals and eventually signed for Kotoko”, he explained.

According to Empem Dacosta, he has always loved to play for the Reds and hence he couldn’t pass on that opportunity.

Meanwhile, a year on at Kotoko, he is now close to being sent out on loan to Legon Cities FC after failing to cement a place in coach Maxwell Konadu’s team in the first round of the Ghana Premier League season.