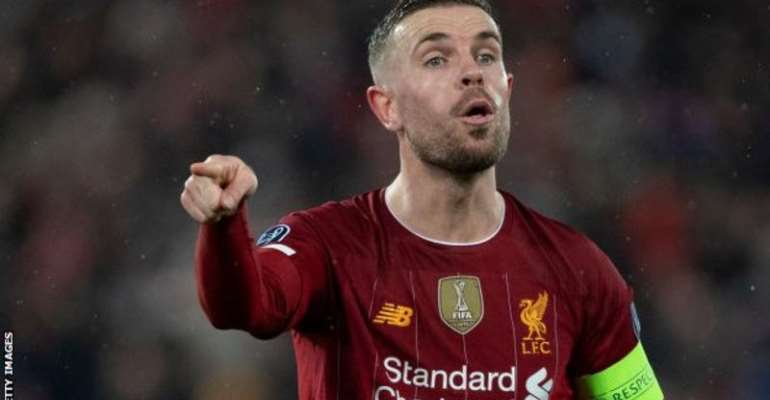 Captains of Premier League clubs have held talks over several days about possible moves to give money to charity during the coronavirus pandemic.

The talks, led by Liverpool captain Jordan Henderson, took place shortly before the Premier League announced it would ask players to take a 30% pay cut in order to protect jobs.

Players across the league have faced calls to take a pay cut.

During the call, Premier League captains discussed wage deferrals or cuts, or a move to help fund a charitable cause.

It is understood players are in advanced talks to set up a collective fund which will offer a "seriously significant" amount, with the NHS the likely beneficiary.

It is not yet known how much will be contributed or if a flat amount from each club will be put forward.

During the enforced break from action, some clubs have furloughed non-playing staff but not looked at players' wages.

Hancock has called on players "to do more and play their part" and his comments were echoed by Julian Knight, who is chair of the Digital, Culture, Media and Sport committee.

Knight has written to Premier League chief executive Richard Masters calling for action on player wages, saying clubs that furlough non-playing staff but do not impose cuts on player wages should be subjected to a windfall tax if they do not change their approach by Tuesday, 7 April.

The League Managers Association (LMA), which represents managers across the English game, said the financial position of clubs varied widely across the leagues as a result of the pandemic.

The LMA said: "The approach has varied from club to club with some clubs placing all staff on furlough, and others excluding key personnel such as managers, club doctors and physios, allowing them to continue working remotely with players so that they are ready to play once it is deemed safe for football to resume.

"In some clubs, where staff have not been furloughed, they have already agreed pay cuts or agreed to defer part of their salaries."

In the Premier League, Tottenham chairman Daniel Levy, who earned £7m last year, is one of those to give up a fifth of their earnings and called on English top-flight players to "do their bit for the football eco-system".

But Palace winger Townsend was unhappy with the demands of Hancock and told Talksport: "Football is trying to do a lot of good. To wake up yesterday and see footballers being painted as villains was a bit of a surprise.

"The health secretary, deflecting blame on to footballers: I don't think that is right. His job is the responsibility of NHS workers. NHS workers have been underpaid for years."