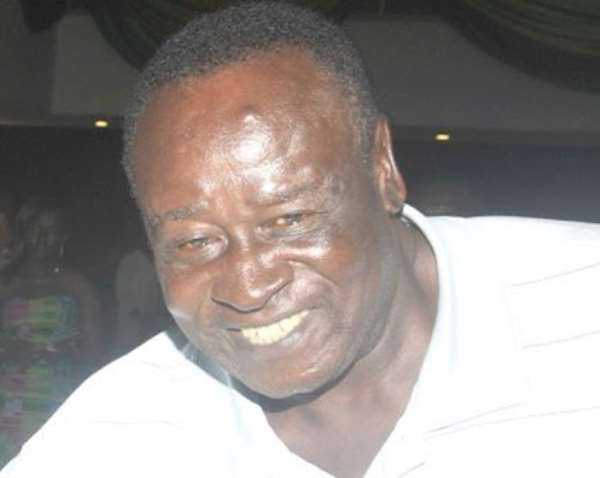 One of the nation’s greatest football icons, Reverend Osei Kofi, has eulogised the late football legend, Kwasi Owusu aka Powerhouse, as one of the finest strikers Ghana has ever produced and demanded that he be celebrated in a manner that recognised his contribution to Ghana football.

Owusu passed on yesterday in Sunyani at the age of 72.

His death came a day after Ghana lost another football legend, Opoku Afriyie, who won the Africa Cup of Nations with the Black Stars in 1978 and 1982.

In his heyday, the burly striker was feared by opposing defenders for his eye for goals and his power-laden shots.

Until 2013, he was the leading goalscorer for the Black Stars with 36 goals to his credit until Asamoah Gyan broke the record as the all-time leading scorer for the national team.

Rev. Osei Kofi placed the late Owusu among the best two strikers in the annals of Ghana football, in his estimation second only to Edward Acquah (also deceased) who made the national team tick in the late 1960s.

However, he recalled with sadness how the former Black Stars captain and Tano Bofoakwa striker was neglected and died as a pauper with no support from the state or the football establishment.

“Kwasi Owusu died as a pauper, he was a lotto-writer until his death. This is a former captain of the Black Stars and was left on his own to die in misery. This is unfair and sad, and makes you ask if this country is worth dying for,” Osei Kofi told the Daily Graphic yesterday as he paid tribute to his former teammate.

“He was one of the greatest players that ever blazed the continent and deserves to be celebrated and given a fitting burial to reflect his status in football history.”

Owusu was a member of the Black Stars team that finished as runners-up at the 1970 Africa Cup of Nations in The Sudan where he scored three goals in the competition, represented Ghana at the 1973 Olympic Games in Munich where he played alongside Osei Kofi, Oliver Acquah, Ibrahim Sunday and Peter Lamptey. He also featured for Ghana at the 1973 All Africa Games (now African Games) in Lagos, Nigeria.

For Osei Kofi, his former teammate was a product of a very competitive league, which brought the best out of him, as his other physical attributes made him a dreaded striker in his prime.

“He is a classic aerial star, he has strength and ability in the air and scored more with his head than any other part of his body. He towers over everyone when he is in the area.”

“Kwasi Owusu, like all of us, was a product of a good national league. He realised his potential because we had a good national league in those days and a competitive one at that, so we could even go to Africa and conquer the whole continent,” Osei Kofi said in eulogising his former teammate.