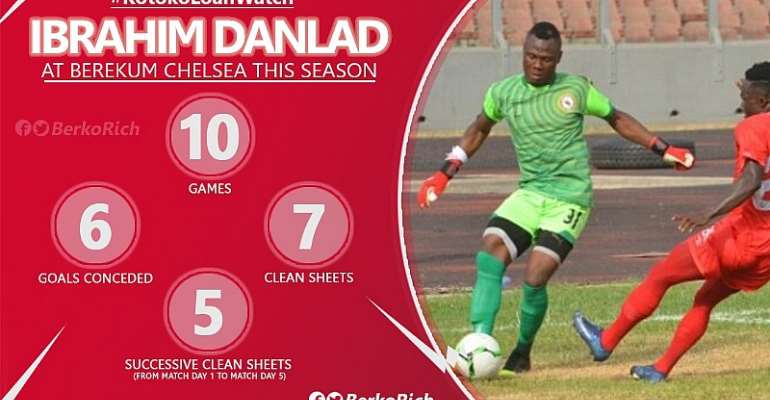 The first-choice goalkeeper for Berekum Chelsea, Danlad Ibrahim has heaped praises on the management and supporters of the club for giving him the necessary backing since he moved from Kumasi.

The former Ghana u-17 goalie moved from Asante Kotoko to the Berekum-based club in a season-long loan move to enable him to enjoy regular playing time before the 2019/2020 football season started.

Now with the Blues, he constantly gets to man the post in the Ghana Premier League, a privilege he was not enjoying during his time with the Porcupine Warriors.

Speaking to West FM as the football season in the country remains suspended due to the Coronavirus (Covid-19), Danlad Ibrahim has expressed his appreciation to the management as well as supporters of Berekum Chelsea.

“I have been enjoying a good season since I joined Berekum Chelsea, the management together with the supporters are good to me so I always played from my heart”, the young goalkeeper said.

He added, “I always feel proud of being a first-choice goalkeeper at Chelsea because it's my first time playing in the Ghana premier league.

“When I was in Asante Kotoko, I couldn't play a single game, always on the bench”.

After 15 matches into the 2019/2020 Ghana Premier League season, Danlad remains one of the best goalkeepers in the division. In his first 5 games, he kept successive clean sheets which attracted a lot of applause.