Government will do more for sports

By The Ghanaian Times. 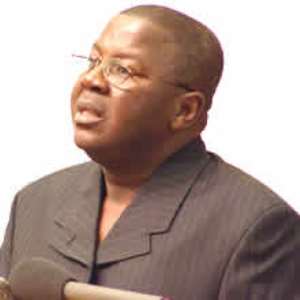 GHANA'S qualification to the next FIFA World Cup in Germany has convinced the government to do more to develop and promote sports in the country, Vice President, Aliu Mahama has said.

In line with this, an amount of ў26.6 billion will be voted to build a multi-purpose sports hall to give meaning to the nation's resolve to develop all sports disciplines.

Part of that money will also be used to purchase modern equipment for sportsmen to train with.

The Vice President said this last Saturday night at the One Touch-Sports Writers Association of Ghana (SWAG) Awards Night. The 31st awards ceremony was held at the Round Pavilion of the Ghana Trade International Trade Fair Centre, in Accra.

Long jumper, Ignatius Gaisah was adjudged the Male Athlete of the Year for the third time running and crowned that effort with the ultimate award of the evening, the Sportsman of the Year.

He obtained 35.8 per cent to beat a strong field of three that includes Black Stars skipper, Stephen Appiah and Chelsea star, Michael Essien.
Gaisah rose to fame after emerging silver medalist at the Helsinki Athletics Championship, setting a new national record in long jump of 8.34m, in 2005, the first time Ghana won any medal in a world championship. At that championship, Margaret Simpson also won a bronze.

Stephen Appiah however managed to shrug off challenges from Michael Essien and Gabriel Issah Ahmed to win the Male Footballer of the Year after leading the Stars to qualify for the nation's maiden appearance at the World Cup.

Alhaji Mahama advised the sportsmen and women to train harder to win more laurels to sustain the new wind blowing in Ghana sports. This he said will spur them on to greater heights.

Ebo Quansah, president of SWAG, lamented the state of the Stars preparation for the World Cup which is barely a month away.

According to him, “two losses and a draw in three trial matches do not indicate that we are battle ready to take on the rest of the world.”
That notwithstanding, Mr Quansah indicated that there is still a lot to do to get the team to gel and in that regard, cautioned the handlers and players against complacency.

“The Black Stars should not be content with qualifying for the World Cup for the first time in over a century of football in Ghana.
We have to go to the cauldron of the World Cup and let the world take note of Ghana as a serious football nation.”

He congratulated Kumasi Asante Kotoko and Accra Hearts of Oak for qualifying to the group stage of the CAF/MTN Champions League competition.
He tasked the Professional League Board (PLB) to come out with a comprehensive programme to ensure that the league commences immediately after the World Cup.

Mr Quansah commended government for its efforts to ensure that the nation stage a successful Cup of Nations tourney in 2008.