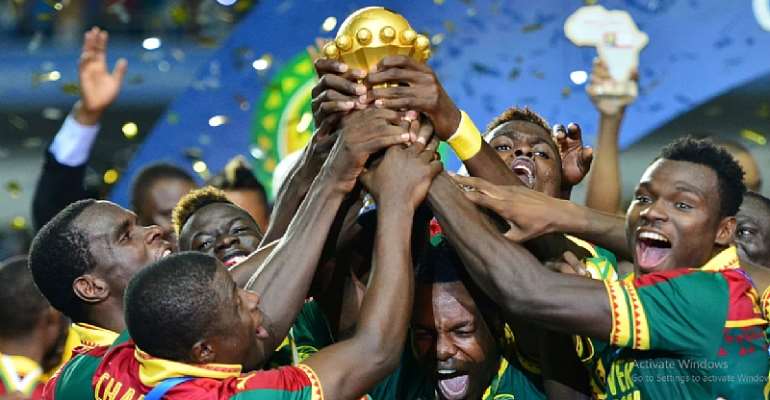 Two titles shy of record winners Egypt, Cameroon have five Africa Cup of Nations titles to their name. Les Lions Indomptables (Indomitable Lions) who first took part in the continent’s flagship competition in 1970 waited till 1984 to have their first trophy.

Cote d’Ivoire 1984
Drawn in Group A, Cameroon started their campaign with a 1-0 defeat to Egypt. They responded with a 4-1 victory over Togo, before defeating hosts Cote d’Ivoire 2-0 to reach the semifinals. They needed a penalty shootout to overcome Algeria 5-4 after a goalless draw in normal time and reach the final for the first time in their history. Despite falling behind as early as the tenth minute against Nigeria, Rene Brice N’djea, Theophile Abega and Ernest Lottin-Ebongue each scored as the Indomitable Lions won 3-1 to taste their first ever AFCON glory.

Morocco 1988
After losing the 1986 final to hosts Egypt on penalties, Cameroon had their second AFCON title in Morocco. They were drawn in Group B where they started with a 1-0 avenging win over holders Egypt, with Legendary Roger Milla scoring the winner. Milla scored again in the 1-1 draw against Nigeria, before settling for a goalless draw with Kenya to reach the semis, where they faced hosts Morocco. Cyrille Makanaky scored 12 minutes from time as Cameroon reached the final for the third time in a row. This time they needed an Emmanuel Kunde goal from the spot to defeat Nigeria 1-0 and win the AFCON title for the second time.

Ghana / Nigeria (2000)
Cameroon claimed their third AFCON title when Ghana and Nigeria co-hosted the tournament in 2000. Placed in Group A, the Indomitable Lions started their campaign with a 1-1 draw with hosts Ghana in the opening game, followed by an emphatic 3-0 victory over Cote d’Ivoire. Despite losing 1-0 to Togo, they still won the group on goal difference to reach the quarterfinals, where they defeated Algeria 2-1. A Patrick M’boma brace and one from Samuel Eto’o saw off Tunisia 3-0 in the semis, as Cameroon reached the final to face the co-host Nigeria in Lagos. Eto’o and M’boma scored again, but Nigeria came from behind as the full time ended in a 2-2 draw. But it was Cameroon who laughed last after prevailing 4-3 on penalties.

Mali 2002
Cameroon took their tally to four after the triumph in Mali 2002. The titleholders finished Group C with maximum points, beating DR Congo and Cote d’Ivoire 1-0, and Togo 3-0. In the quarterfinals, they needed a goal from Patrick M’boma to beat Egypt 1-0 and set a date with the hosts Mali in the semifinal, where they crushed the former 3-0 to reach the final. After a goalless draw with Senegal in full time, Cameroon won 3-2 on penalties to claim their fourth AFCON title, without conceding any goal in the process.

Gabon 2017
Fifteen years after winning their fourth title, Cameroon added a fifth AFCON glory in Gabon 2017. The Indomitable Lions started their Group A campaign with a 1-1 draw with Burkina Faso, before defeating debutants Guinea-Bissau 2-1. A goalless draw with hosts Gabon ensured their place in the quarterfinals, where they defeated Senegal on penalties after a barren stalemate in full time. A 2-0 over Ghana in the semis earned Cameroon a date against record champions Egypt in the final. They came back from a goal down to score twice through Nicolas Nkoulou and Vincent Aboubakar after the break to seal AFCON title number five.