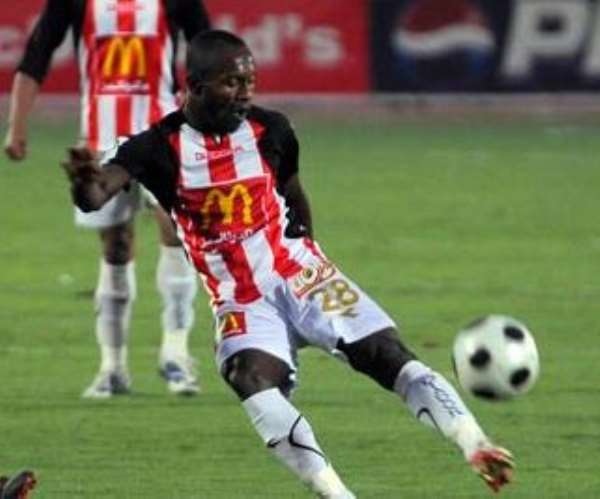 Ghanaian forwards Ernest Papa Arko and John Antwi have been listed in top five foreign strikers who shined in the Egypt Premier League away from the two giants Al Ahly SC and Zamalek SC.

There have been so many strikers who have graced the Egypt top-flight. Some have come from other African countries, others also came from the South America and Asia.

Here is a review of those who succeeded playing for other sides and not Al Ahly and Zamalek SC.

The former Nigeria attacker played for El Mokawloon and Ismaily SC where he emerged as top scorer of the Egypt league before heading to Qatar.

Utaka went ahead to play European clubs Racing Lens, Stade Rennes, Montpellier all in France and also played for English side Portsmouth FC.

The former Enugu Rangers forward returned to Egypt to play for Ismaily again before moving to Nogoom El Mostakbal and Aswan SC.

He had a short stint at Zamalek SC but wasn't successful.

Papa Arko played with top players during his time and was the Egypt league top scorer in the 2008/2009 season.

Even though he didn't win the top scorer award again, he was a consistent scorer making him one of the all-time top scorers in the history of the league for his series of brilliance.

Antwi started with Ismaily SC when he first made it to Egypt. After emerging top scorer in the league, he made a move to Saudi Arabia side Al Shabab in a deal worth €1.95 million.

Antwi returned to giants Al Ahly and didn't live up to expectation. He spent three seasons at Misr El Makasa on loan and was scoring for fun.

Last season he joined moneybags Pyramids FC.
Antwi is currently the highest-scoring foreigner in the history of the Egypt Premier League.

Coming from Colombia, the striker joined Ismaily SC for two seasons through which he was the league top scorer with 18 goals in his spell.

After the wonderful debut season, Calderon joined Al Faisaly Club in Saudi Arabia for around €1.3 million.

Fans called for Calderon to granted Egyptian nationality at a time the national team was lacking a real striker.

A delay in the documentation and other procedures prevented the completion of the nationality switch.

The former Sierra Leone striker and one of the best African players who participated in the Egyptian league outside the top clubs throughout history.

He played for Al Qanat Port Said and was in Al Ahly because of his influential goals.

Mansaray moved to Al Ahly to completely hide his star and left the Red Devils without putting a real footprint with the team.