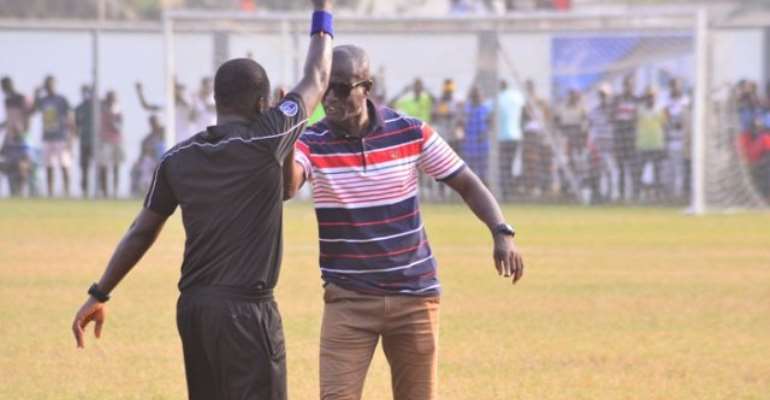 The Disciplinary Committee of the Ghana Football Association (GFA) has handed a 3-match suspension plus a fine of GH¢5000 on Bechem United coach Kwaku Danso.

The decision has been taken as a punishment for his action during the club’s match against Medeama SC on Matchday 8 of the 2019/2020 Ghana Premier League season.

Coach Kwaku Danso and some of the club officials confronted the referee for the match after they conceded a late goal after playing more than five minutes of added time.

Having been summoned to the Disciplinary Committee, he has been slapped with a 3-match suspension in the Ghana Premier League.

In addition to the 3-match suspension, the Bechem United trainer has been fined GH¢5000.

“Kwaku Danso is suspended for the Club’s next Three (3) official matches. The Committee also affirms the punishment proposed by the Prosecutor, however, the fine of GH¢10,000 is reduced to GH¢5000 payable to the GFA within fourteen (14) days upon receipt of this Ruling.

“Coach Kwaku Danso is warned to be of good behavior in subsequent matches failing which he would receive a severer punishment for any breaches of the GFA’s Rules and Regulations”, a statement from the GFA on Friday said.

Meanwhile, the two other Bechem United officials, Osei Yaw Collins, and Godfred Yeboah Berko have been handed 2-match suspensions and fined GH¢2000 payable to the GFA within fourteen (14) days