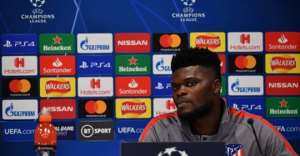 Ghana midfielder, Thomas Partey has revealed what he and his Atletico Madrid teammates have been instructed to do during the coronavirus pandemic.

The outbreak of Covid-19 has brought football activities to a standstill.

In Spain where the 26-year-old plays, nearly 20,000 people have been infected and more than 1,000 are dead, making it the second hardest-hit European country behind Italy.

The virus as a big blow for Atletico who were fresh from a famous 4-2 aggregate victory over Liverpool in the Champions League before football activities had to be put on hold.

"Yes, we received an email saying the games [against Osasuna and Valladolid] had been postponed and that there was the need to remain professional and try to work from home while this virus situation is resolved,” Partey told the Mirror.

"We were also told what we would be doing during this period and that the way forward would be communicated on a daily basis.

“We are still in contact and of course we have the group chats and the manager is always in touch if he needs to get a message across but we all know that human life is way important than anything at this point,” he added.

Partey’s brilliant performances for Atletico Madrid this season has seen him heavily linked with a transfer away from the Wanda Metropolitano.

This has led to Atleti reportedly considering doubling his current release clause of €50 million to keep suitors off.