Hearts of Oak To Sanction Board If Club Loses Point, Says Supporters Chief 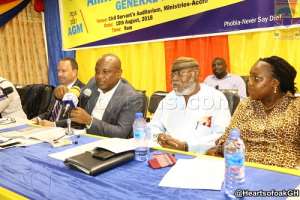 Supporters Chief of Accra Hearts of Oak, Elvis Herman Hesse has revealed that the board will punish any member responsible for the club’s deduction of points in the Ghana Premier League.

The Ghana Premier League giants are set to lose points for fielding unqualified player in their game against Elmina Sharks.

The Ghana Football Association Disciplinary Committee is yet to sit on the case and should Hearts lose these points will see them in the relegation zone.

“Personally I was vocal on these issue at the board meeting," he told Happy FM.

“We can’t risk our lives travelling with the team across the country and then due to the negligence of one person the team will lose points. Whoever is held responsible will be penalized.

He also debunked reports in the media that there is division among the supporters' group.

“It’s not true that there is division among the supporters group. It’s just differences in opinions”.

“We are working to ensure Hearts of Oak gets back to its glorious days," he said.