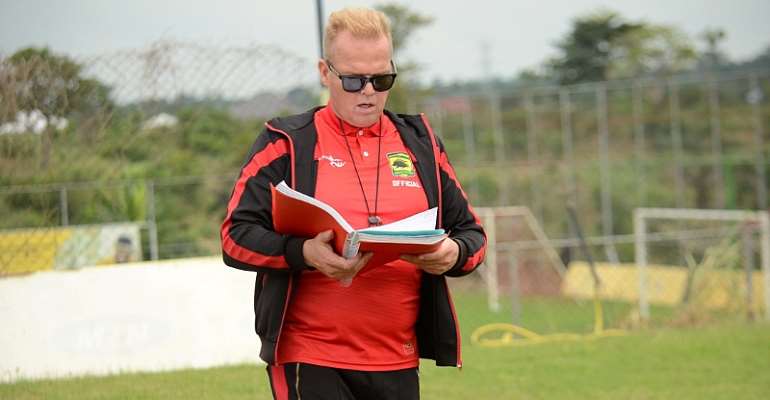 Former Asante Kotoko head coach, Kjetil Zachariassen has called on the hierarchy of the club to sack the most of the management members with the exception of veteran football administrator, George Amoako.

The Dr Kwame Kyei's led administration has been accused of failing to steer the affairs of the club properly since taking over from Samuel Opoku Nti.

According to the Norwegian trainer, the current management does not have any idea about running football.

The former Ashgold gaffer further called in the hierarchy of the club to sack all management with the exception of Mr George Amoako due to his experience.

"I always believe that coaches need to be coaches and the management should be doing management they should never miss that," he told Oyerepa FM.

"But the way they did it is way over the line by far over the line. When they point with their finger to one person,3 is going back to them, don't blame others blame themselves.

"When we had a meeting and they wanted to sack me, all of them were there all management and quote me they said Coach now we are here at crossroads, so they want to sack me and I said if I am going we should all go because we are in this together, we have done this together.

He continued, "They don't have an understanding of how to build a club, they don't know "shit" about building a club, they know nothing.

"They do an evaluation after their own bellies are not good. So they should have left with me.

"All of them in the management should leave their post, all of them, they should have left when I left.

"They should not fire Maxwell now let him stay but they will fire him and blame him, Kotoko supporters are tired of them, how they run the club, all they think is about themselves their bellies.

"All of them, George can stay maybe, he has some experience," he added.