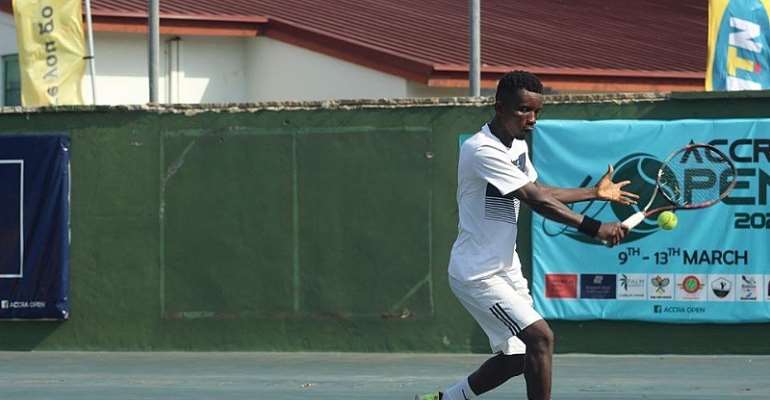 Benjamin Fumi cemented his place at the top of Ghana tennis by defeating Johnson Acquah in a three-set epic battle to win the Accra Open title at the National Tennis Center, Accra

The Tennis Professionals of Ghana (TPG) No.2 seed Benjamin Fumi had the edge over his opponent who is the No.1 seed; Johnson Acquah in a gripping battle that ended 6-7(5),7-6(4),6-0 in four hours 20 minutes to win his second TPG Tour title.

In the first set, Fumi looked rattled by Johnson Acquah’s intensity and made 18 unforced errors which resulted in him losing the first set in a tiebreak 7-6(5).

Fumi came back rejuvenated in the second set by breaking Johnson’s first service game and although that was the only break in the second set to lead 3-0. But Johnson fought back strongly to level things up to 3-3.

After both players taking their serves to tie-break, Fumi then underlined his dominance by firing down four aces to push the game to the final set.

Johnson looked like he lacked belief in himself as he made a slow start in the final set, not managing to win the receiving game. Fumi's forehand winner down the line brought up two championship points. Fumi fell to his knees after sealing his first title in 2020 and smacking the court with both hands and screaming towards his fans.

After the game, Fumi said, “I was on the brink of losing that match,” Fumi said. “I didn’t feel great at all. Johnson was dominating from the back of the court and he won the first set and was even about to win the second set. I had to change the style to force the game to the final set".

Fumi added that 'I can describe this win as one of the biggest wins of my career. I didn't expect to be in this position at all. I'm happy. Very happy'.

They both received cash prizes and assorted gifts from the sponsors.

Mr Amoako Boafo congratulated the finalists and urged them to play hard and appealed to other companies to support the game of tennis.