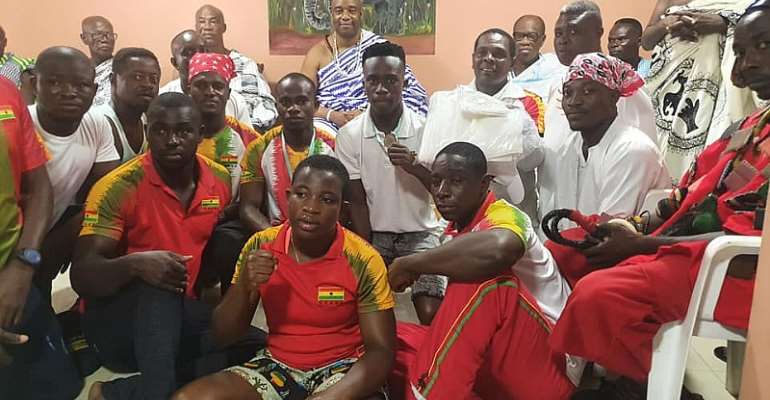 The Ga Mantse, Nii Teiko Tsuru II has tasked the leadership of the Ghana Boxing Federation (GBF) to take up bigger responsibilities in world boxing to encourage the national team to also fight hard to be rated among the best in the world.

Speaking through the Dr Nii Tetteh Kwei II, the Dzaasetse of the Ga Paramount stool on Sunday when the Black Bombers paid a courtesy call to show appreciation for his prayers and spiritual guidance and support, the royal highness congratulated the team and inspired the two who qualified for the Tokyo 2020 Olympics to target the gold medals and go for it.

Coach Dr Ofori Asare, the technical director who led the team to Senegal for the qualifier said over 200 boxers from 38 nations competed and five Ghanaians went to the semi-finals with two getting their tickets to Tokyo.

He appealed to the government to support amateur boxing as they have the history of winning medals for the nation.

Featherweight sensation, Samuel Takyi and skipper Sulemanu Tetteh presented their bronze medals to the chiefs and expressed their readiness to battle for the ultimate at the Olympic Games.

The GBF president, George Lamptey presented a certificate of appreciation to his royal highness.

Joining the Black Bombers to the king’s palace was the communications director of the Ghana Olympic Committee (GOC), Sammy Heywood Okine and Nii Mustapha Nettey of Boxing Ghana.

Black Bombers call on Ga Mantse, Nii Teiko Tsuru III on Sunday morning to express appreciation for his support before their participation at the Africa qualification tournament for Tokyo 2020 last month in Dakar, Senegal.