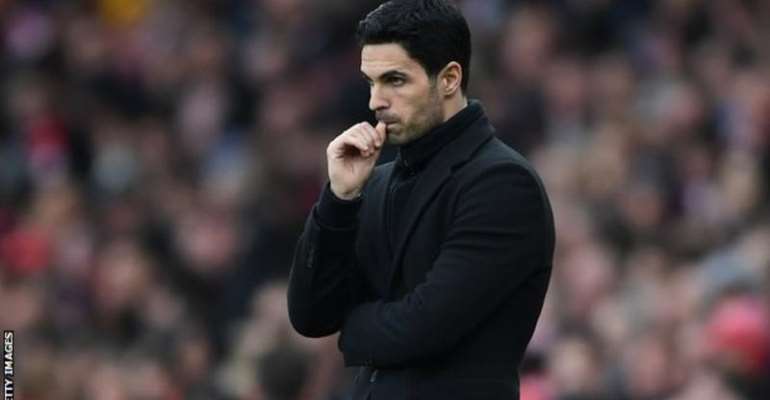 The Gunners have closed their training ground, while staff who had recent contact with Arteta are self-isolating.

"Thanks for your words and support," the Spaniard, 37, wrote on Twitter. "We're all facing a huge and unprecedented challenge.

"Everyone's health is all that matters right now. Protect each other by following the guidelines," he added.

"We'll come through this together."
In addition to the suspension of the Premier League, Friday has seen widespread sporting postponements worldwide.

Arsenal expect a "significant number of people" will self-isolate, including the full first-team squad.

"The health of our people and the wider public is our priority and that is where our focus is," said Arsenal managing director Vinai Venkatesham on Thursday.

"We are in active dialogue with all the relevant people to manage this situation appropriately, and we look forward to getting back to training and playing as soon as medical advice allows."

Arsenal said Marinakis, 52, met a number of their players when the Gunners hosted the Greek side in a Europa League match on 20 February.

The Gunners had said on Wednesday that no players or staff would be tested for coronavirus.

Manchester City defender Benjamin Mendy is self-isolating as a precaution after a member of his family was admitted to hospital displaying symptoms of coronavirus.

Football has been suspended in Italy, Spain, France, Germany, the Netherlands, Portugal and the USA.

I Felt Very Safe Under Mahama – Manasseh
59 minutes ago