Kotoko’s Clash Against Elmina Sharks Ends In A Stalemate 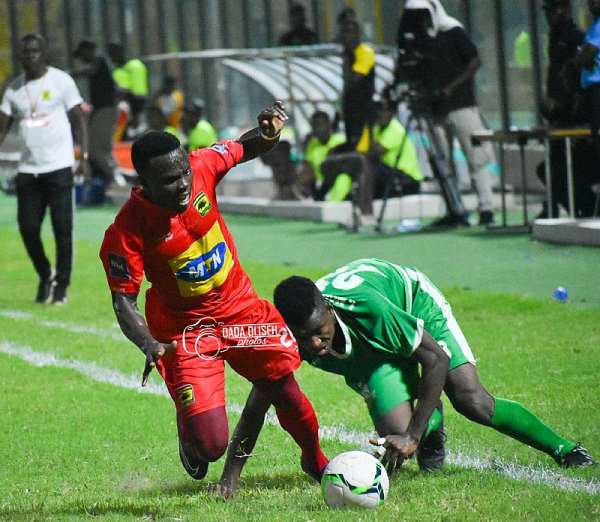 Kumasi Asante Kotoko has been held to a goalless draw by Elmina Sharks at the Accra Sports Stadium this evening in the Ghana Premier League.

The Porcupine Warriors were in action today against the side from Elmina as they wrapped up matches on Match Week 14 of the ongoing 2019/2020 season.

Both teams started the match on a good note to try and get an opening goal to upset the other. Though they managed to create a lot of chances in the first 30 minutes, neither could find the back of the net.

Asante Kotoko, in particular, enjoyed the better of possession but Augustine Okrah and William Opoku Mensah who had the best chances of the half failed to convert them into goals.

Later in the second half, Kotoko head Coach Maxwell Konadu introduced forward Sogne Yacouba into the match to replace Augustine Okrah. The move which was to add more firepower to the attack of his team worked by putting pressure on Elmina Sharks.

Nonetheless, the away team stay resilient and held the Reds to a goalless draw game at the end of the 90 minutes.