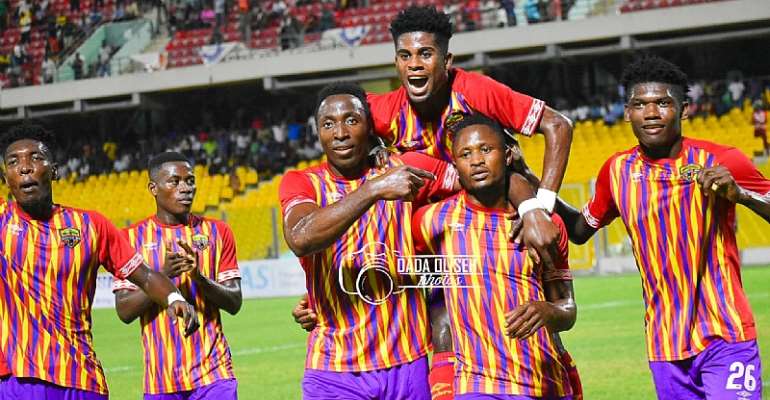 A brace from midfielder Benjamin Afutu plus a goal each from Joseph Esso and Daniel Afriyie Barnieh has handed Hearts of Oak a massive 4-0 win against Great Olympics at the Accra Sports Stadium.

The Phobians and the Dade Boys were in action this evening to battle for 3 points as well as bragging rights as to who rules the capital in what was a Match Week 14 fixture of the ongoing 2019/2020 Ghana Premier League season.

Hearts who played as the home team started off on a very good note as they made their intent to grab all 3 points clear front the blast of the first-half whistle.

Just 16 minutes into the game, forward Joseph Esso who has endured a goal drought in the last five games found the back of the net to shoot his side into the lead after an effort from Kofi Kordzi had been parried away by the Olympics goalkeeper.

Though the away team came in strong after conceding, brilliant goalkeeping from Richard Attah ensured the Rainbow lads went into the break with their lead intact.

After recess, midfielder Benjamin Afutu chipped in with two goals to take the match beyond the reach of Great Olympics before an equalizer from winger Daniel Afriyie Barnieh put the icing on the cake for the winners in the dying minutes of the clash.

With today's win, Hearts of Oak has climbed from 9th to 6th on the Ghana Premier League standings and just 6 points adrift from the team at the top.