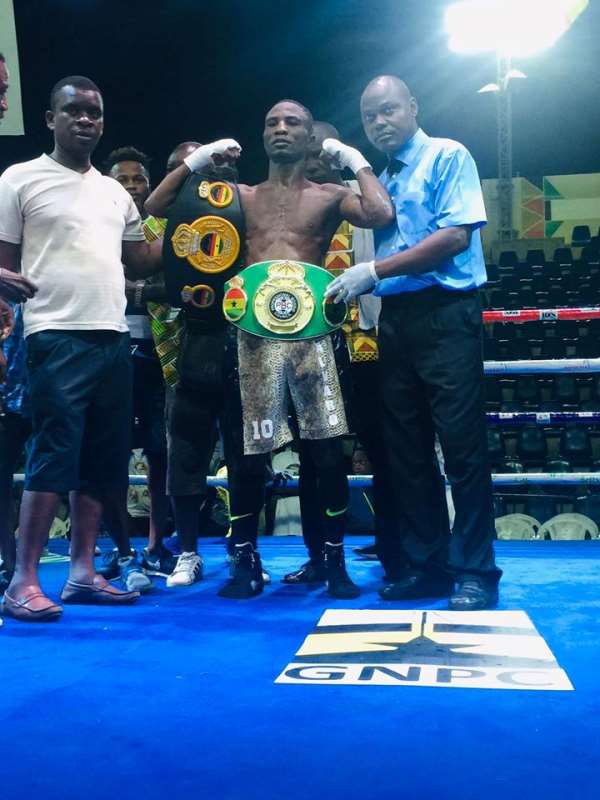 The Professionals version of the Bukom Fist of Fury Fight Night came off on Saturday 7th March at the Bukom Boxing Arena with the collaboration of Box Office Promotions and the Ghana Boxing Authority (GBA).

The exciting bill featured mostly popular young and experienced boxers and the fans had their monies worth with the high standard of boxing displayed and officiating was also good.

John Laryea aka Expensive Boxer beat Mustafa Appiah in round three of their contest. He said he wants to meet bigger challenges and even hit the international platform. Laryea who is managed by Samuel Anim Addo of Baby Jet Promotions was advised by some top boxers to keep up his game.

Alfred Lamptey, the young prodigy who is known as the Bukom Bomber boxed his way to defeat good Raymond Commey on a unanimous decision. After the fight, he showed respect to the veteran boxer also known as Chorkor Banku.

Faizal "Poncho Power" Abubakari, the Zongo champion who wants to rise to become a world champion knocked out Francis Pappoe in round five to delight his numerous supporters.

Felix Ajom from the gym of coach Carl Lokko, the Bronx Gym defended his nation featherweight title with a knockout win over Malik Jabir in round 5,

Lambert Fogoum of Cameroon won by TKO in round 6 against Stephen Abbey of Ghana in their Universal Boxing Organization (UBO) Cruiserweight Championship over ten (10) rounds.

MC/ring announcer of the night was Nii Nettey Mustapha Nettey of Boxing Ghana fame who was for the first time in the centre of the ring performed creditably.

Meanwhile, the main bout which is a Commonwealth title eliminator between champion Michael Ansah and challenger Sherif Quaye has been fixed for May 30 at the same venue.

Popular boxer Ayitey Powers may be featured on the next bill of Box Office.