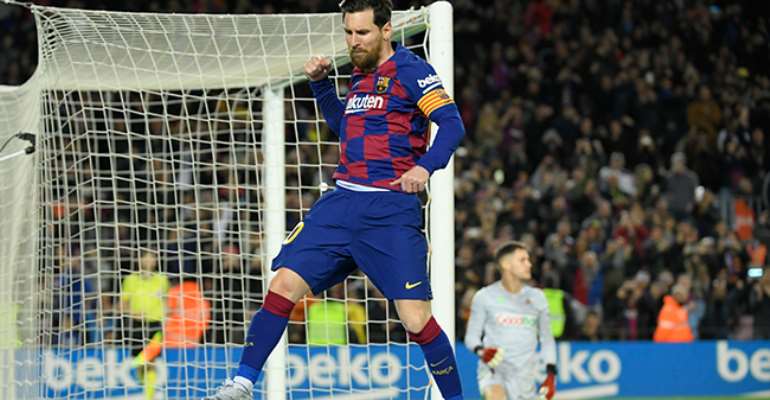 Lionel Messi scored a late penalty as Barcelona edged to victory over Real Sociedad to move top of La Liga.

The home side's spot-kick was awarded for Robin le Normand's handball, which the referee saw on the pitchside monitor, allowing Messi to convert.

Alexander Isak smashed a shot wide from Sociedad's best chance of the game.

Barca thought they had a second in the 95th minute when Jordi Alba stroked a finish into an open net, but substitute Ansu Fati was adjudged to be narrowly offside by VAR.

Former Middlesbrough striker Martin Braithwaite, who signed for Barca in an emergency transfer outside the transfer window, was dangerous in the first half, striking a couple of shots straight at Sociedad goalkeeper Alex Remiro.

Ivan Rakitic had a thumping effort from the edge of the area pushed away, while Gerard Pique headed straight at Remiro from inside the six-yard box.

Messi seemed to be having an off day when he side-footed a shot wide from 10 yards out and curled another off target, but the skipper proved to be the match-winner, clipping home an 81st-minute penalty for his 19th league goal of the season.