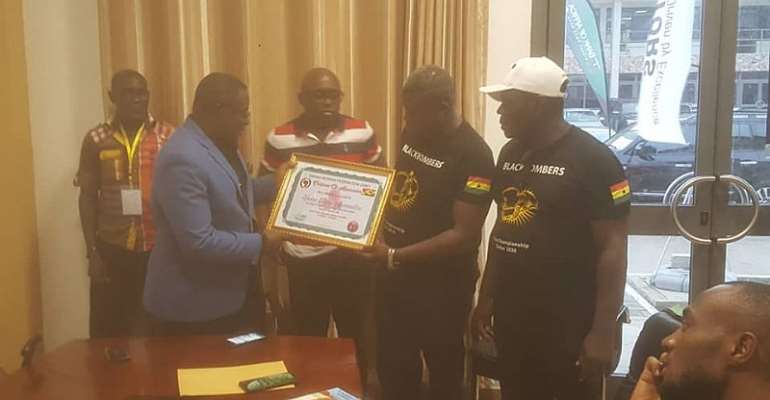 The national boxing team, the Black Bombers have presented the medals and qualification tickets to the Ghana Olympic Committee (GOC) at a short but impressive ceremony at the Trust Sports Emporium in Accra.

President of the Ghana Boxing Federation (GBF), Mr, George Lamptey presented a certificate of appreciation to the president of the GOC, Mr Ben Nunoo Mensah and thanked him for the support, encouragement and motivation that was given them, and for ensuring that the represented Ghana at all cost and qualify for the Tokyo 2020 Olympic Games.

He also appreciated the GOC for ensuring that the Black Bombers are well accommodated and fed at the Games Center in Dakar, and were able to grab two slots in the keen competition attended by 38 countries.

Mr Richard Akpokavie, secretary-general of the GOC who watched all the Black Bombers bouts commended their effort and appealed to corporate Ghana to support the Olympic teams and the GOC.

Mr Ben Nunoo Mensah congratulated the 10 boxers made up of eight males and two females and said the GOC and the nation was very proud of them.

He assured that efforts would be made to see if the other boxers who reached the semi-finals could be supported to qualify in at the world qualifiers in Paris, France in May.

He also commended the media and boxing fans who wished the Black Bombers success.