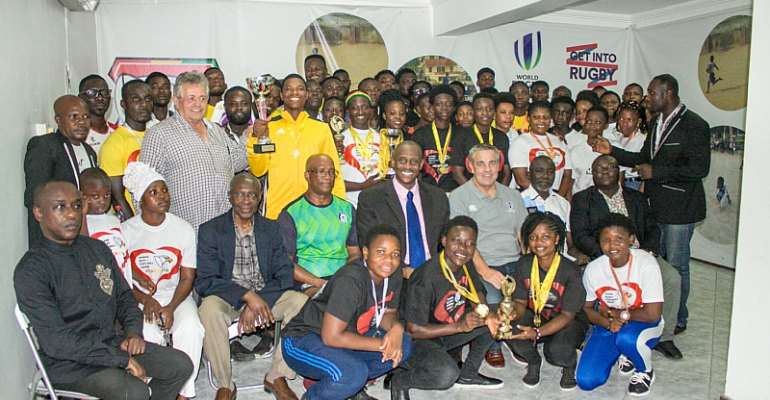 ACCRA, GHANA. 06/03/2020/ - Ghana Rugby presented trophies and awards to teams and players for the 2018/19 and 2019/20 Ghana Rugby Club Championship (GRCC) in a ceremony in Accra Ghana that was graced with the presence of Mr. Steph Nel, World Rugby Service Manager: Africa.

Mr. Chester Anie, Board Member: Judicial Affairs, was the MC for the event and directed affairs in an orderly fashion and encouraged participants to give the winners a big hand throughout proceedings.

The ceremony was addressed by Mr. Herbert Mensah, President and Board Chairman of Ghana Rugby, in the presence of Nel and two other dignitaries including World Rugby Trainer Mr. Denver Wannies and Rugby Africa Development Manager: West and Central Africa, Mr. Charles Yapo.

Mensah congratulated all the winners and runners-up with their participation and their achievements in the past two years’ GRCC and said that the standard of rugby in Ghana is gradually improving.

For the 2018/19 Men’s 15s GRCC the Championship Trophy and gold medals were presented to Conquerors SC by Mr Steve Noi, Board Member and Tournament Commissioner of Ghana Rugby. He also presented medals to runners-up Dansoman Hurricanes RFC and bronze medals winners Griffons RFC.

Mensah also announced the players of the 2019/20 GRCC. For the men “Big Mike” (Michael Arthur) of Griffons RFC achieved the “Man of the Championship” award while Paulina Yaa Mensah of Conqueror’s Ladies was selected as the “Lady of the Championship”

Mensah also made special awards to Coach Lovemore ‘Dallas’ Kuzorera and Match Official Jeffrey Chiwanda, both from Zimbabwe, for the enormous contribution they are making to lifting the standards of rugby in Ghana.

Nel and Yapo visited Ghana Rugby as part of a tour of West African rugby unions to discuss the strategies of the Unions for the next four years and to provide guidance to Ghana Rugby on focus areas that they should concentrate on.

Wannies came to Ghana as a follow-up of his recent training visit and qualified three Educators and five L2 Coaches.

According to Mensah this visit was a landmark in the history of Ghana as it was the very first time that Educators and L2 Coaches were qualified in Ghana.

“Wannies is an exceptional World Rugby Trainer who went out of his way to support Ghana Rugby to achieve its ambitious goals and we will forever be in his debt,” Mensah said.