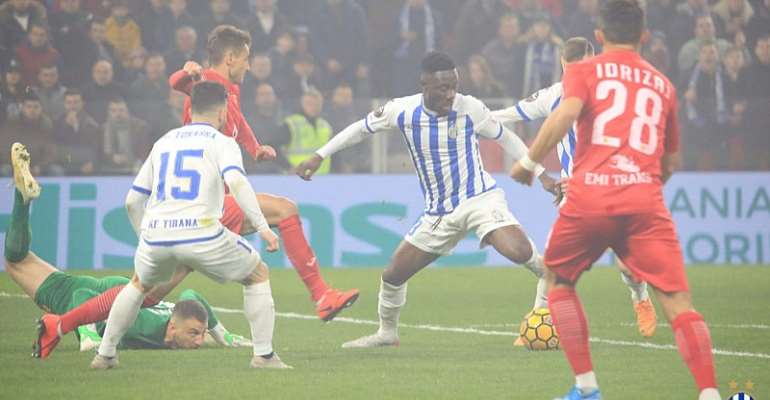 Ghanaian international Winful Cobbinah was on target today as his FK Tirana side cruised past Flamurtari with a 2-0 victory in the Albania Premier League.

The two top-flight clubs locked horns at the Flamurtari stadium to fight for 3 points on Match Week 25 of the ongoing 2019/2020 season.

A crunch encounter in the opening 30 minutes of the match proved tight and evenly-matched with neither side unable to find the back of the net. Ten minutes to the break, however, Jürgen Vrapi popped up and scored to hand FK Tirana a deserved lead.

Though Flamurtari came in strong in the second half, they were stopped in their tracks by some compact defending from the way team. Eventually, a pulsating encounter was wrapped up courtesy a late goal from Winful Cobbinah.

The former Hearts of Oak poster boy showed potency in front of goal as he powered his effort from inside the opponent’s 18-yeard box into the back of the net on the 88th minute.

FK Tirana’s win has ensured that they stay top of the Albania Premier League and with a 6 points gap.

For Cobbinah, his statistics have now been updated to 5 goals and 2 assists in the ongoing season.