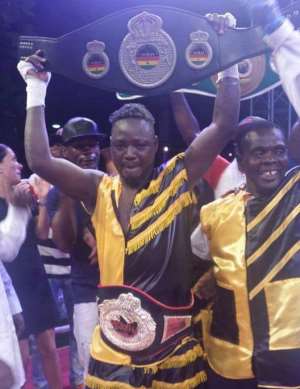 One of Ghana’s promising boxers in the middleweight division, Issah Samir secured a 10 round contest with Janibek Alimkhanuly on the Artur Beterbiev and Fanlong Meng fight.

The fight which is scheduled for the Center Videotron, Quebec city Canada on 28th March is promoted by Top Rank and commissioned by the Quebec Boxing Commission.

The undefeated Ghanaian is expected to leave Ghana with his trainer Coach Ofori Asare who just got back from a national assignment in Dakar with the National Amateur team (Black Bombers) and Michael Baron Quartey cornerman who is also the representative for the Global Boxing Stars in Ghana. The team is expected to leave Ghana on the 20th of March.

Samir (18-0, 15 KOs) 30, fought Patrice Sou Toke March 2019 at the Bukom Boxing Arena pounding him to a Unanimous decision and have been busy in the gym looking for a world title fight.

Fredrick Lawson, another Ghanaian who is in the welterweight division is also expected to finalise his fight arrangement with Michael Zewski on an undercard of the fight.