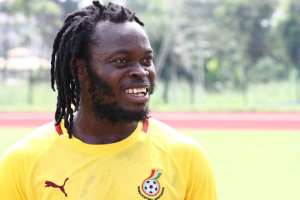 Aduana Stars livewire, Yahaya Mohammed has expressed his excitement after his call up to the Black Stars.

Mohammed, 32, is among four local players that have earned a call up to the Black Stars call up.

After the announcement, the former Kotoko forward expressed his delight adding that he is ready to impress.

Mohammed has scored 10 goals for Aduana Stars.
Below is the full squad