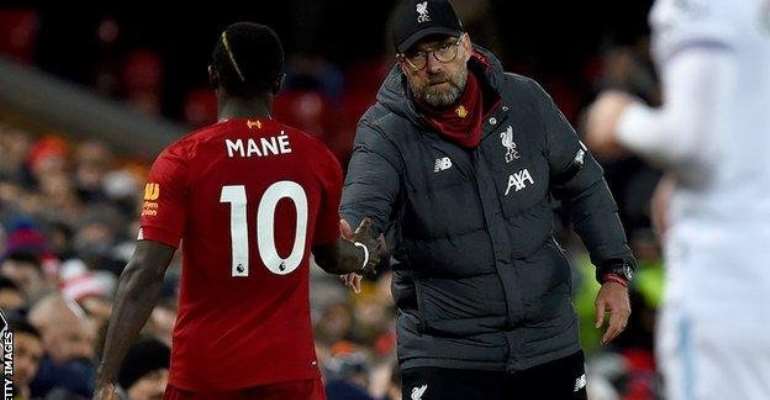 The Reds are 22 points clear at the top of the table and closing in on a first title for 30 years, but Mane says he is not interested in personal accolades.

"I heard yesterday that if we win the league, we will have a medal," Mane told BBC World Service.

"I never knew that happened, but I don't care about medals."

Mane finished as a runner-up last season and, despite the Reds being so far clear that they could win the title in March, the 27-year-old says his side's domestic dominance this term "has not been easy".

"Easy? Oh, I wish," he said. "We know the Premier League is the best league in the world and every single game you have to give 100% if you want to win.

"It's what we always try and I think it's working very well but we have to keep working hard to get what we want.

"Our target from the beginning was to win the league, so if we win it, it will be great for the club and for the fans."

Mane was signed by Jurgen Klopp in the summer of 2016 when he joined from Southampton, and the forward says he would be "honoured" if the German receives a statue at Anfield.

"For sure I think there will be one because he is a great manager and he is doing very well for the club and the players," he said.

"He has his specific way of doing things and he gives his players more responsibility on the pitch which is really important.

"At the same time, he is very friendly with his players so that is one of his big strengths."

The 2019 African Footballer of the Year was born in a small village in Senegal and he says his upbringing was "difficult" but he "never stopped dreaming" of becoming a professional athlete.

"If you see where I came from in a very small village far from the capital in Dakar, it was really tough, but it's part of life and you have to dream and keep going every single day," he said.

"You have to have self-belief, never give up and work hard. I think that's the key, and putting it in your head that you will become something."

Despite being one of the best players in the world, Mane says his mother and uncle "hate football" and always thought it was a "waste of time".

"They never wanted me to play football so I had to go school and do something else, but I am successful so I have proved them wrong," he added.

Since becoming a professional, Mane has provided money to hospitals in his native Senegal, but he does not wish to take any credit for his charity.

"I don't want to speak about this kind of thing, I think those people need it so I do what I can," he said.

Following his exploits on Merseyside, he says "everybody in Senegal is a Liverpool fan" and the public are "proud" of his achievements.

"Two years ago it wasn't the case - there were more Manchester United, Barcelona and Real Madrid fans but now it's Liverpool everywhere," he said.

"When Liverpool play now it's like the national team is playing, so if we win this trophy, it will be massive."

Asked whether he is treated like a living god on his return to the country, he said: "Yes, for sure they do try. They are just proud and happy to see me achieving this level."