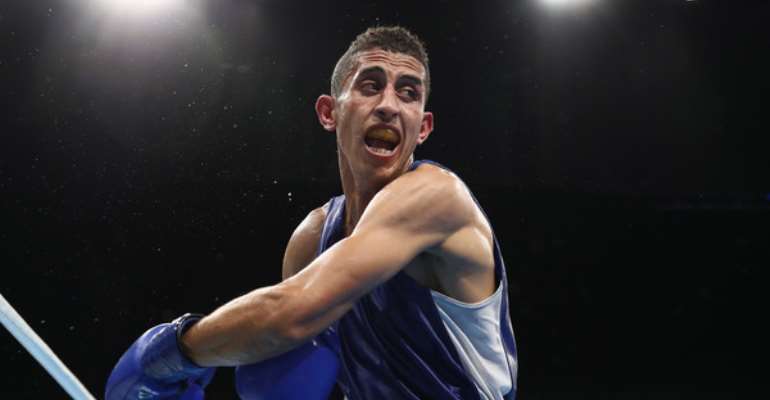 Algeria underlined its position as the powerhouse of African boxing as it qualified seven boxers for the Olympic Games on Wednesday at the Olympic qualifying tournament in Dakar, Senegal.

All finalists at the first of five Olympic qualifying events were guaranteed a spot in Tokyo this summer and, on a remarkable day of action, seven of the eight Algerian boxers who had made it to the last four stage won.

The winners included Abdelhafid Benchabla, 33, who will be going to his fourth Olympics, but his first as a heavyweight, having been beaten in the quarter-finals at light-heavyweight in each of his previous games, one win short of a guaranteed medal.

Olympics-2020
Mohamed Flissi, the flyweight, and Chouaib Bouloudinats, the super-heavyweight, will each be going to their third Olympics.

The North African nation has a strong Olympic history and was the last African nation to win Olympic gold, in 1996 through Hocine Soltani. That is a legacy that still burns today, according to Chouaib Bouloudinats, the super-heavyweight, who will be heading to his third Olympics.

“We have a long history of boxing but our performance here is proof that Algeria is the home of boxing in Africa like Russia, Cuba, Kazakhstan [in Europe, America and Asia].”

After 172 bouts in Dakar, there are just two sessions remaining in the Africa Olympic Qualifying tournament. So far 26 boxers have secured their route to Tokyo for the Olympics this summer, but there are still another seven places up for grabs and a great deal of pride to box for too.

Morocco qualified four boxers, with the hopes of two more still alive in the box-offs, but perhaps the most remarkable story of the tournament has been Zambia, who only sent a team of three to Dakar, aged 19, 19 and 20, and they all qualified. The names of Patrick Chinyemba, Everisto Mulenga and Stephen Zimba will be ones to look out for in Tokyo.

“We promised Zambians that we are going to Tokyo,” Zimba said. “We came here the three of us and all three of us have qualified. People back home will be very proud of us for this achievement. Boxing is big back in Zambia, it’s second to football.”

There were two qualifiers from Cameroon, Mozambique and Tunisia, as well as one each from Botswana, the Democratic Republic of Congo, Kenya, Mauritius, and Namibia.

Nick Okoth will be 37 by the time the Games come around, but the Kenyan team captain qualified for his first Olympics since Beijing in 2008 and found it an emotional experience.

“My wife called me today and told me, 'go get the ticket',” Okoth said. “I told her, 'don’t you understand how tough the fights here are?' She said, “you are tougher!”

“To go back where I have been 12 years later is something, I will never forget this day. None of the Kenyans who fought today have made it, so I know what this means for them, the coaches and Kenyans.”

Another boxer fighting back the tears was Richarno Colin, of Mauritius. "These are tears of joy,” he said. “I worked so hard for my third Olympics after Beijing and London. I am not a full-time boxer, I train morning and evening and in between, I work at the sports council as a handyman, cleaning and doing other stuff.

“This is special. I wish I can go to Tokyo and get to the podium.”

Where there are winners, there must be losers too. Ghana and Uganda had high hopes at the start of the day, having both seen five boxers reach the semi-finals, only to see them all lose. However, both countries still have four boxers with a chance of making it to Tokyo through the box-offs.

Thursday is a rest day, but there are sessions on Friday and Saturday, with 13 finals and seven box-offs in the women’s flyweight division and the men’s weight categories between flyweight and light-heavyweight.

The sessions begin on Friday and Saturday at 4pm (UTC/GMT) and are exclusively live on olympicchannel.com

After the action finishes in Senegal, attention will quickly shift to Amman, Jordan, where the Asia and Oceania qualifier begins on Tuesday, having been moved from Wuhan, China, because of the coronavirus epidemic.

Coverage of every bout in Dakar, Amman and all five Olympic qualifying events is on olympicchannel.com.

Togbewo Afede XIV and Sri III: We Want to Hear Your Royal Vo...
52 minutes ago