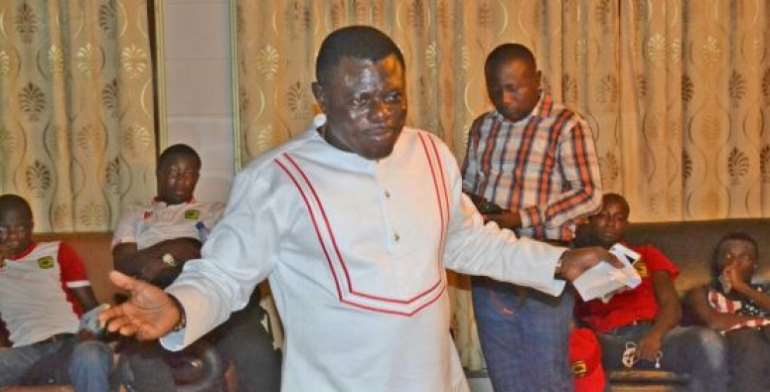 Executive Chairman of Asante Kotoko, Dr Kwame Kyei, has descended on the players following their shocking exit from the MTN FA Cup on Sunday.

However, in an audio recording leaked from the crisis meeting held yesterday with the coaching and playing staff of the club, Dr Kyei was heard telling the players and coaches to walk away and stop embarrassing him if they felt they could not do the job.

“I don’t care dissolving the entire team. I can dissolve the whole team, sack all of you and start afresh. I don’t mind. This club is not a useless club. It is a team with history. This stupid and village attitude is the reason you cannot play in Europe,” Kwame Kyei began his inquest.

“Camarat (owner of Asokwa Deportivo) doesn’t even have 100 cedis to give to his players. He buys porridge and they all share to eat. That’s their only motivation to play.

“You all here are paid so well, more than in any club. Then you allow these small boys to beat you and you call yourselves professionals,” he said.

“I won't’ sit down and let you lose so that someone will come and insult me. I won’t tolerate that.

“Look at the way they booed you (players) after the game; like thieves. And you were happy.

“From the coach to the players; if any of you is not ready to play for Kotoko, you can leave. I will reconstitute the team,” Kwame Kyei said before reportedly storming out of the meeting.

Kotoko will now turn their attention to their matchday 12 clash with Bechem United on Friday at the Accra Sports Stadium.

Apart from being out of the MTN FA Cup, Kotoko are also down in 5th position in the league, having lost 3 games so far this season.