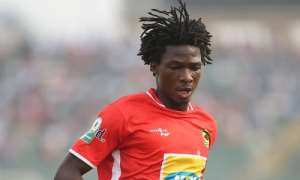 Information reaching Modernghana Sports has indicated that Asante Kotoko is set to open fresh negotiations with Sogne Yacouba after the player expressed readiness to lower his demands.

The poster boy of the Porcupine Warriors will leave the club at the end of February 2020 as a free agent if his contract is not extended.

In the past couple of months, the management of the club tried to sort things out but the forward’s demand of $150,000 dollars per month's salary forced the club to drop their interest while citing that they will not be able to afford.

With the club seemingly struggling to grind results and their recent failure in the MTN FA Cup, supporters are pushing for Sogne Yacouba’s contract issues to be sorted out immediately.

In an interview with Oyerepa FM, Ashanti Regional Circles Public Relations Officer (PRO) for Kotoko, Osei-Asibey has opined that they have had a meeting with the attacker and his agent who are now ready to lower their demands to allow for a contract extension.

“National Circles Council has met Songne Yacouba and his reps and the player is ready to play, and has come down on their demands so we are waiting to hear from management on that. He is the supporter’s favorite and we need him,” he said.

In line with the latest development, the management of Kotoko will likely begin another contract talks with Sogne Yacouba and his agent in a bid to keep him at the club beyond the expiry of his contract.