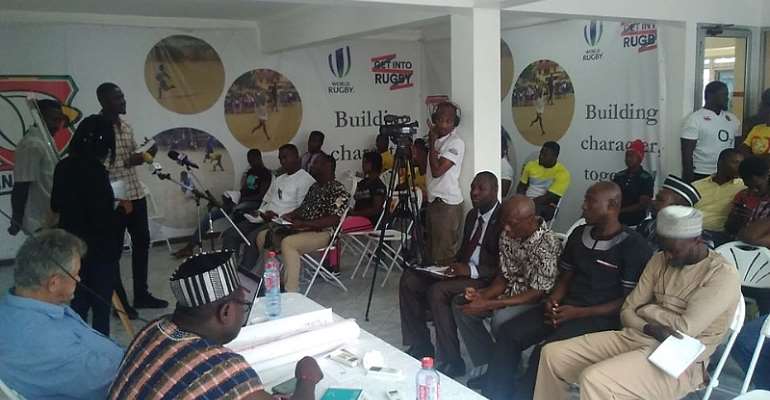 The Ghana Rugby Football Union (GRU) has organized a successful stakeholders workshop at its office at Osu in Accra.

The event attracted executives, players, officials and some media personnel.

According to Herbert Mensah, the Union will be facing increased and tougher participation in international Rugby Africa Tournaments, increase in the number of domestic competitions, expansion of "Women in Ghana Rugby", dramatic expansion in youth development through the World Rugby "Get Into Rugby" programme, more intensive and extensive training and education of coaches, match officials and medical officers, and increased demand on governance and administration.

Mr Mensah continued to say, “Because it is just not logistically possible to invite all our stakeholders to take part at the 22 November GRSC, the Ghana Rugby Board has created a mechanism whereby anybody can take part by posting a question, suggestion or even a complaint.

He invited the thousands of social media followers, players and other stakeholders to have their say.

Mensah said that all inputs will be considered as valuable contributions that will guide his administration to come up with a new Blueprint for Ghana Rugby.

“We did the same in 2014 when I got involved with Ghana Rugby, and the resulting Blueprint from them guided us to achieve an enormous lot in a very short space of time. The time has come that we re-look that Blueprint and that we adapt our strategies and plans if necessary. To do that effectively we need the inputs of those who have a stake in Ghana Rugby,” Mensah said.

Rafatu Inusah, a board member said Ghana Rugby will study all inputs and share the feedback.

Lawyer Chester advised the gathering on code of conduct, discipline and abiding by laws of the game and natural laws.

He asked players and officials to build good character and respect others, especially opponents. He stressed that there is always room for discussion and no one should take the law into their own hands.

He also urged them to exhibit positive reputation and shun abusive language, character and behaviour, saying that attitude is very essential.

He noted that 2020 is an action year for Ghana Rugby to move to another high level after the achievements chalked in the last four years.

Ms Erica Amoako also spoke on corporate affairs, building relationships and seeking sponsorship, and how to carry a positive image of the Union to attract support and sponsorship.

She advised clubs to find their feet by being independent from the national body to finance themselves.

Rian Malan spoke on the finances of the Union said they have been operating on the president’s loan account, and their expenditure is higher than their income.

At the end, most participants agreed that the players must demonstrate their commitment by paying membership fees and the media must promote the game more with more education.

The Ghana Rugby Union used the platform to thank President Nana Akuffo Addo for supporting them with $100,000.