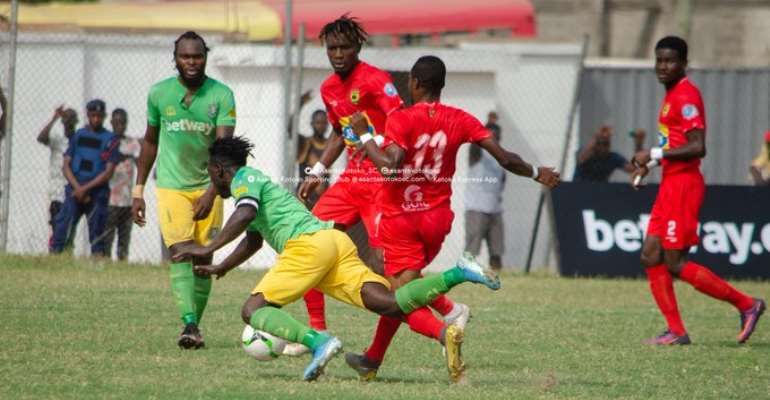 Six matches were played in the matchday 11 of the Ghana Premier League campaign on Wednesday with the two matches expected to be played on Thursday.

At the Nana Agyemang Badu Park in Dormaa, Aduana Stars‘ continued their home dominance over Asante Kotoko as they pipped the Porcupine Warriors 1-0.

The match was drowned in a lot of controversies after the teams started with 10 men each for no official reason but it was eventually decided by a 90th-minute goal from Samuel Bio.

Hearts of Oak recorded their 5th clean sheet of the season after a goalless draw with Karela FC at the Akoon Park in Tarkwa.

In Accra, Victorien Adebayor failed to propel Inter Allies against Medeama SC as they were tamed 2:1 by Samuel Boadu's side.

Medeama broke the deadlock in the 15th and 62nd minutes through Nana Kofi Babil and Prince Opoku Agyemang while Allies’ goal came from Victorien Adebayor whose 89th-minute goal was his 11th of the season.

Elmina Sharks stunned Ebusua Dwarfs after a 7th-minute goal from Benjamin Boateng settled the tie in a regional derby in the coastal part of the country.

An own goal from Abdulai Ibrahim was the difference for Ashgold as the top of the league table with the win against Dreams FC at the Len Clay Stadium in Obuasi.

In Techiman, Eleven Wonders drew 1-1 with WAFA. Musah Sule gave the home side the lead in the 47th minute but Eric Asamany struck for WAFA in the 70th minute.

Two matches are expected to kick off tomorrow.

NDC Dominates Here, If Your Problems Are Not Being Solved, I...
3 minutes ago