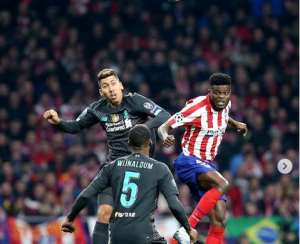 Ghana Black Stars players have heaped praises on Thomas Partey for his five-star performance against Liverpool in the round of 16 in the Champions League on Tuesday.

The 26-year-old helped the Los Rojiblancos to record a 1:0 win over the defending champions Wanda Metropolitano.

The Ghana international was good on the ball, having 53 touches, 26 accurate passes (72.2%), two key passes and three successful long balls from seven.

On the defensive side, the Atleti academy graduate won seven of 10 ground duels, three of three aerial duels and also made one interception and five tackles.

After the game, Partey used his official Instagram page to hail his teammates with the caption “ESFUERZO, EQUIPO Y AFICIÓN” which means “EFFORT, TEAM AND AFFECTION”.

However, some Black Stars players hailed Partey for his brilliant display against Jurgen Klopp’s side.