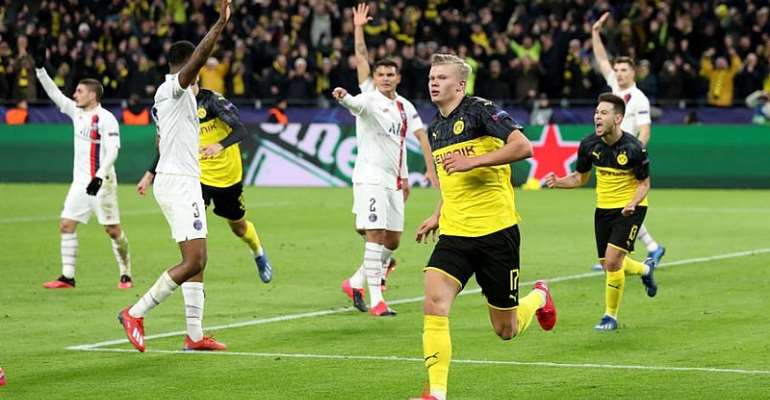 Forward Haaland took his tally to 11 goals in seven games since Dortmund paid Salzburg €20 million for the 19-year-old with second-half goals either side of Neymar's equaliser.

The Brazil star, who has been sidelined for the last four weeks with a rib injury, gave PSG a life-line with an away goal for the return leg in Paris on March 11 in their bid to reach the quarterfinals after exiting the last 16 in the last three consecutive seasons.

After Haaland stabbed home at the near post to give Dortmund a deserved lead midway through the second half the world's most expensive player profited from Kylian Mbappe's final pass and tapped home the equaliser.

After the Neymar missed last season's surprise last-16 loss to Manchester United with a foot injury, this was exactly what travelling Parisian fans at Signal Iduna Park had wanted to see.

However, PSG were level for just two minutes as Dortmund's 17-year-old midfield replacement Giovanni Reyna put a pass inside which Haaland smashed into the top corner for the winner.

Dortmund deserved the win with PSG's star-studded attack, led by Mbappe and Neymar, repeatedly frustrated with Dortmund's defensive midfielders Axel Witsel and Emre Can on hand to snuff out attacks.

There was very little to separate the teams in the first-half with a saved shot from Dortmund's English winger Jadon Sancho the only clear-cut chance of the opening 45 minutes.

Dortmund kept finding plenty of holes in midfield with Witsel calling the shots.

His midfield partner Can, whose loan deal from Juventus was made permanent earlier in the day when he signed a four-year contract, had a penalty appeal waved away by referee Jose Montero after being clattered in the area by Marco Verratti.

After the goalless first half, Dortmund poured forward and kept finding spaces to exploit down the flanks.

Soon after Dortmund's Swiss coach, Lucien Favre threw on Reyna, who turned 17 last November, for his Champions League debut, Haaland got the breakthrough soon after when he stabbed home past PSG goalkeeper Keylor Navas on 69 minutes.

With their German coach Thomas Tuchel frantically urging them on, PSG were level six minutes later when Mbappe unpicked the Dortmund defence and presented Neymar with a straight-forward finish.

However, the scene was set for Haaland to continue his phenomenal scoring run with some clinical finishing from Reyna's final pass when he blasted home the winner to the delight of the home crowd.