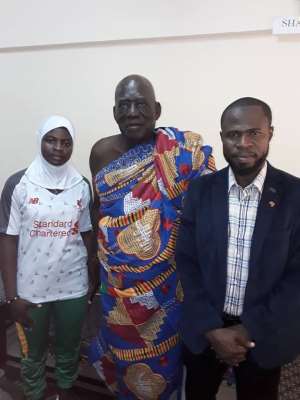 The Paramount chief of Capa Coast Traditional area Osabarima Kwesi Atta IV has given full backing to the upcoming international African Junior and Cadets Fencing Championship which comes up at the University of Cape Coast from February 24th to 29, 2020.

President of the Ghana Fencing Association, Mohammed Mahadi who called on the chief with some officials and players including Bertha Mawunyo Gakpetor, captain of the Women’s Epee and the assistant general captain said although fencing is a baby sport in Ghana, it has attracted a lot of attention and hopes to deliver a good tournament.

He said fencing is one of the sports disciplines that can earn the nation some medals at international competition like the African Games coming up in 2023.

The Omanhene of Cape Coast, Osabarima Kwesi Atta IV commended the fencing federation and their executives as well as athletes for their vision in deciding to host the event at the historic tourist city of Cape Coast and urge the people of Cape Coast to generate interest and play fencing.

He said if possible the students must take part so that there can be inter-schools events.

On the preparations of the Ghana team, Mahadi said they are ready and believes the Ghanaians are going to do well.

He also appealed to the media to support and promote the event which is sponsored by the National Sports Authority, International Fencing Federation, University of Cape Coast, the Ministry Of Youth & Sports and the African Fencing Confederation.

The theme for the championship is ‘it is all about Africa’, and many African countries have shown interest to participate.