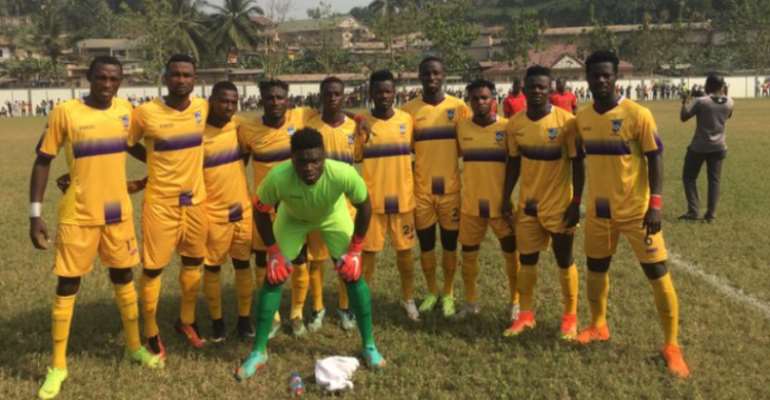 Ghana Premier League side Medeama SC have issued a grovelling apology to the fans following their 2-1 loss at home to Elmina Sharks on Sunday.

Elmina Sharks produced a stunning performance to bring to an end the home invincibility of Medeama, beating the Mauve and Yellows 2-1 in Tarkwa in matchday 10 of the 2019/2020 Ghana Premier League.

Benjamin Bernard Boateng scored with the last kick of the game to shock the home side at the fearful Akoon park.

For Sharks, this is a massive feat against a side which has remained resolute at home since the start of the season.

Medeama shot into the lead courtesy the club’s leading scorer Prince Opoku Agyemang in the 15th minute but Alhaji Mustapha pulled parity, capitalizing on a defensive mistake by debutante Rashid Alhassan to turn him inside out to grab the equalizer.

As the game was held to a 1-1 draw, Benjamin Bernard Boateng struck on the closing stanza of the game to snatch an important 2-1 away win for Coach Yaw Acheampong’s side to the disappointment of the home fans.

The Miners, have thus apologized to their fans and have assured them a swift recovery from the painful loss to return to winning ways.

”A very bad day in the office today but we shall rise again. Apologies to our fans for the heartbreak. We never give up!,” the club tweeted after the game.

Medeama travel to Accra to battle Inter Allies on Wednesday.