'It Couldn’t Have Been A Better Debut!' - KP Boateng On His Debut Goal For Besiktas 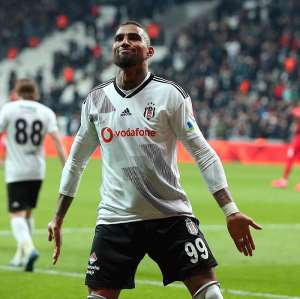 Kevin-Prince Boateng has expressed his joy after scoring on his debut for Besiktas in the Turkish Super Lig.

The 32-year-old made his debut for the club on Saturday, having been introduced as a second-half substitute.

Boateng replaced Adem Ljajic in the 46th minute and went ahead to score in the 70th minute as Besiktas won 3-0 against Gaziantep FK.

Boateng was extremely delighted with his debut goal and took to Twitter to revel in the moment.

“Happy for the goal and the win of the team!” Boateng wrote. “It couldn’t have been a better debut!”

The former Ghana international joined Besiktas on loan from the Italian side Fiorentina until the end of the season.

The Turkish side, however, has an option to make the move permanent after the six-month loan deal.

Meanwhile, the win over Gaziantep FK has lifted Besiktas to 7th on the league table after 21 games.