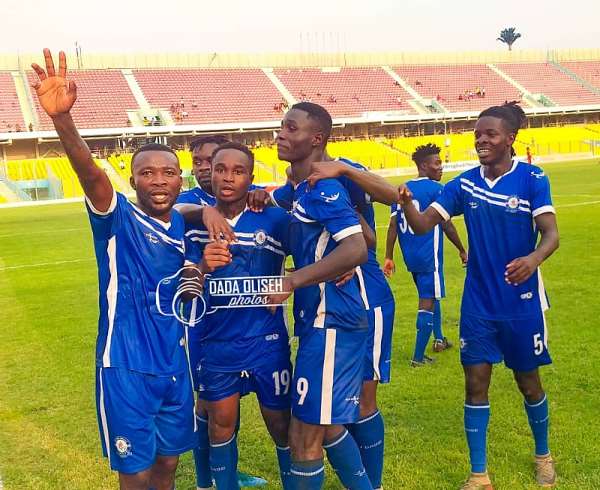 Accra Great Olympics has recorded an important 4-3 win against King Faisal in the ongoing 2019/2020 Ghana Premier League today to enhance their hopes of maintaining their top-flight status at the end of the season.

The club known for having countless nicknames was in action against Alhaji Grusah’s side at the Baba Yara Sports Stadium earlier this afternoon for a Match Week 8 fixture of this season’s campaign.

A good start to the first half by Great Olympics saw them taking the lead courtesy a penalty converted by experienced striker Emmanuel Clottey. That goal separated the two teams at the end of the first half before Clottey scored a second 3 minutes into the second half.

Later in the game, Osman Ibrahim reduced the deficit for King Faisal when he found the back of the net on the 64th minute. Five minutes later, he scored again to restore parity for the home team.

Now on level-pegging, Great Olympics upped their game and took the lead for the second time in the match when Razak Yussif got on the scoresheet on the 73rd minute.

Though Baba Yahaya leveled the score for King Faisal 6 minutes later, it could not save the side from defeat as veteran midfielder Gladson Awako hit the back of the net on the 81st minute.

From there, Olympics held on and emerged as 4-3 winners to ensure they bagged all 3 points.

It's not good at all — GMA expresses concerns over rising CO...
11 minutes ago