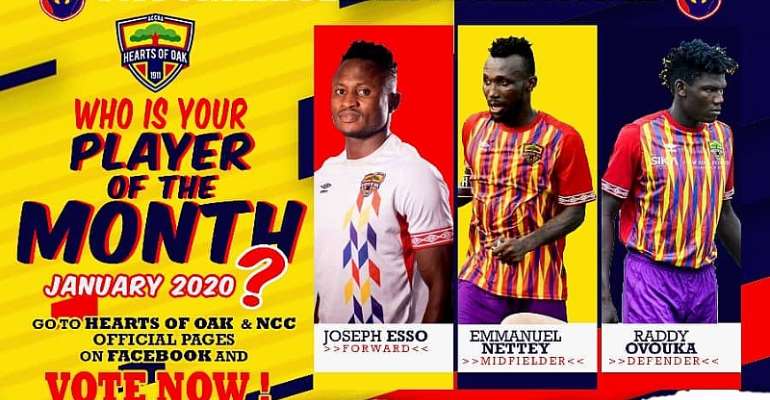 Hearts of Oak’s new signing Emmanuel Nettey is battling with poster boy Joseph Esso for the club’s ‘Player of the Month’ award for January in the ongoing 2019/2020 Ghana Premier League season.

Unlike Nettey, Esso started the season with the Phobians when they lost by a goal to nil against Berekum Chelsea on Match Week 1 where he impressed. Since then, he has gone on to play outstandingly well and remains one of the key assets of the Accra-based club.

The former Ebusua Dwarfs attacker has so far netted two goals for the Rainbow lads which have helped the team amass points.

For Nettey, he missed the first two matches of the season but has equally played very well in all the four matches he has played for Hearts of Oak. His explosive play and confidence on the ball in midfield has won the hearts of fans who now adore him.

The two players are now competing for the club’s ‘Player of the Month’ award which will be announced by the close of this week.

So far, Emmanuel Nettey is leading the votes on Twitter with 52.3% while Esso comes in with 47.7%.

Hearts of Oak fans can vote in the post below.