SHOCKING: 'John Mahama Ordered Kwesi Nyantakyi To Sack Me To Save His Govt.' - Kwesi Appiah Reveals 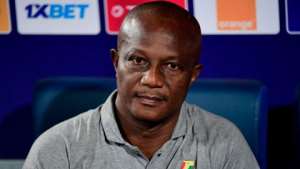 Ex-Black Stars coach Kwesi Appiah has revealed that former President John Dramani Mahama ordered the GFA to fire him in the aftermath of the 2014 World Cup.

Appiah is currently promoting his recently launched autobiography, which is titled 'Leaders Don't Have To Yell'.

The book discusses the life, career and experiences of the 59-year-old as a player and as a coach.

The 400-page book is a leadership memoir in which Appiah shares his account of key events during his playing days and his two stints as coach of Ghana.

In one of the pages, the 59-year-old said former GFA President, Kwesi Nyantakyi, confessed to him that John Mahama, who was President at the time, ordered for him (Appiah) to be sacked after the 2014 World Cup.

In his view, the political machinery was flexing its muscle and used him as a scapegoat, while others like the Sports Ministers were left off the hook.

“To anyone who was objectively looking at the facts of the circumstances surrounding Brazil 2014, it was obvious that my termination was an attempt by the powers-that-be to shift blame away from themselves,” Appiah wrote.

“Kwesi Nyantakyi called me to his office that day and informed me that he had been asked by the President of the nation to relieve me of my duties.”

Appiah was fired as Black Stars coach in 2014, following Ghana’s shambolic outing at the World Cup in Brazil.

However, he was reappointed Ghana coach in 2017, a post he held until his contract expired in December last year.