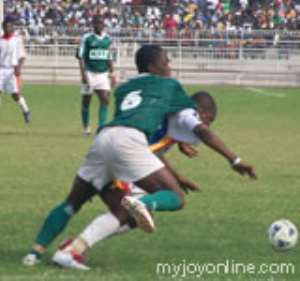 Accra Hearts of Oak came from a goal down to draw 1-1 with Berekum Arsenals at the Golden City Park in Berekum in the ongoing Ghalca Top 4 competition.

The results leave Berekum Arsenals on third spot with four points while Hearts maintain their lead with 6 points from four matches.

Kumasi Asante Kotoko and King Faisal will be in action later today at the Sunyani Coronation Park.

And Kotoko coach E.K Afranie says the table would change after their game against their city rivals.

"We would all be at par today.

"Their (Hearts) means a lot can change and the competition is not over yet.