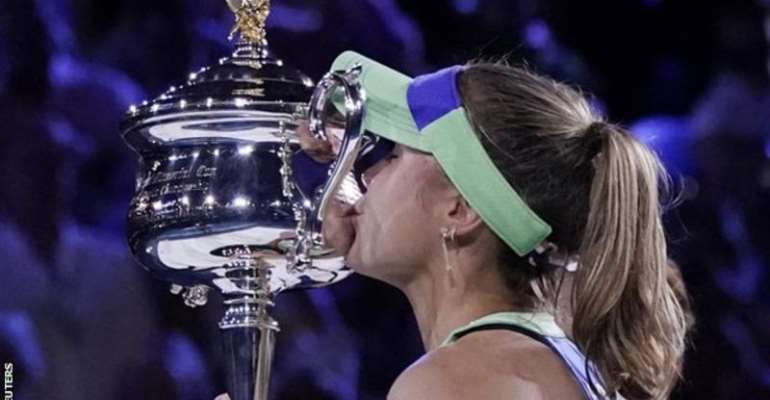 American Sofia Kenin fulfilled her potential by winning a first Grand Slam title with victory over Spain's Garbine Muguruza at the Australian Open.

The 21-year-old was a child prodigy, who started making television appearances from the age of five and hitting with the stars soon after.

"My dream has officially come true," said Kenin, the eighth first-time women's champion in the past 12 Slams.

"Dreams come true. If you have a dream then go for it - it will come true.

"These two weeks have been the best two weeks of my life."

Kenin, who turned 21 in November, is the youngest Australian Open champion since Russian Maria Sharapova in 2008.

The American 14th seed was gifted victory when Muguruza produced a double fault on the second match point - the Spaniard's third of the game and eighth of the match.

Kenin dropped her racquet to the court and covered her face in shock, before going over to the opposite corner where her dad - and coach - Alex was sitting.

The pair warmly cupped hands before she returned to the court, spinning around and lifting her arms up towards him again in a gesture which summed up her shock.

Kenin was born in Russia but was a few months old when she moved with her parents to the United States, where she picked up a racquet at the age of five.

Raised in Florida, she quickly became a star in the States, featuring on television programmes and the covers of magazines which predicted a successful professional career ahead.

Famously, aged five, she claimed she would be able to return a serve from hard-hitting American star Andy Roddick, then practised with Grand Slam champions John McEnroe, Venus Williams and Kim Clijsters.

Two years later she spoke of her ambition to win one of the sport's biggest prizes.

Now she has achieved her dream. And that confidence illustrated while still at primary school remains one of her key attributes.

Kenin never gives up and never shies away from a fight on court, which is what she found herself in after Muguruza won the opening set.

Demonstratively frustrated, she came out punching in the second, returning even more relentlessly than usual. Muguruza, who won the 2016 French Open and 2017 Wimbedon titles, could not cope.

Breaks at 2-1 and 5-3 enabled Kenin to take the match into a decider, before she swung the momentum of a tight third set her way with a monumental hold for 3-3.

Trailing 40-0, she fought back with five points of the highest quality. Two backhands down the line under the most intense of pressure were outrageous, a third winner - this time down the other flank - almost ridiculous.

An ace out wide and a crosscourt forehand winner - after drawing Muguruza into the net - clinched the hold. It also virtually clinched the championship.

From that point, Muguruza's confidence waned, with the Spaniard losing serve in the next game and again - in the most painful of circumstances - in what proved to be the final game.