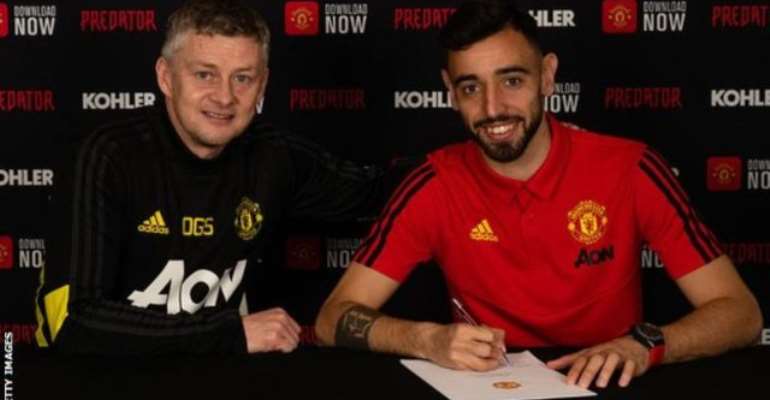 Bruno Fernandes says he will give "everything" to bring "success and trophies" to Manchester United after joining on a five-and-a-half-year deal from Sporting Lisbon.

Fernandes' move is the biggest in the Premier League so far during the January transfer window - with the deadline at 23:00 GMT on Friday. He follows Cristiano Ronaldo, Nani and Marcos Rojo in joining Manchester United from Sporting.

His deal, which runs until 2025, also has an option to extend for a further year.

"My love of Manchester United really started when I used to watch Cristiano Ronaldo play and ever since then I have been a big fan of this great club," added Fernandes.

"I have worked hard to get to this moment and I can promise the fans that I will give everything for the badge to help bring us more success and trophies.

"I want to thank Sporting for everything they have done for me. It is surreal to hear the nice words that have been said about me from players that used to play for this team."

'Bruno's stats speak for themselves'

Fernandes joined Sporting for £7.2m from Sampdoria in 2017 and the club's former manager Carlos Carvalhal told BBC World Service United had signed a player "from another level".

The midfielder scored 64 goals in 137 matches in all competitions for Sporting and won the Portuguese Cup in 2018-19.

Solskjaer said: "Bruno's goals and assists stats speak for themselves. He will be a fantastic addition to our team and he will help us push on in the second part of the season.

"We have been tracking Bruno for many months and everyone here has been tremendously impressed with all his attributes and what he will bring to this team.

"Most importantly, he is a terrific human being with a great personality and his leadership qualities are clear for all to see."

The fee paid to Sporting will increase if a series of conditions are met - including United's qualification for the Champions League.

United would pay an additional 5m euros (£4.2m) if they achieve Champions League qualification, with a further 5m euros subject to Fernandes' participation. The remaining payment of 15m euros (£12.6m) is based on individual player prizes.