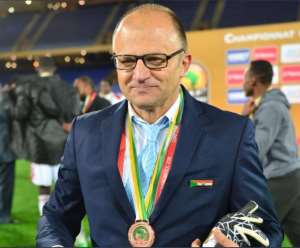 The Zimbabwe Football Association (ZIFA) has announced today that they have appointed Croatian international Zdravko Logarusic as their new head coach as they put things in order ahead of the qualifiers to the 2022 Qatar FIFA Wolrd Cup.

The South African country has been pitted in Group G of the African qualifiers to the global tournament where they will be battling with Ghana, as well as Ethiopia and South Africa.

Ahead of the qualifiers which will start in October, ZIFA has named Zdravko Logarusic as the head of the technical team of its male senior national football team.

“Zdravko Logarusic has been appointed as the Warriors coach on a 2-year performance-based contract. The Croatian has a UEFA Pro Licence & a CAF A license. He has coached the national team of Sudan and top clubs in Ghana, Kenya, Angola & Tanzania. To be unveiled in 2 weeks”, a statement confirming the appointment of the former Kumasi Asante Kotoko gaffer said.

The tactician will be working with the following as his assistants: